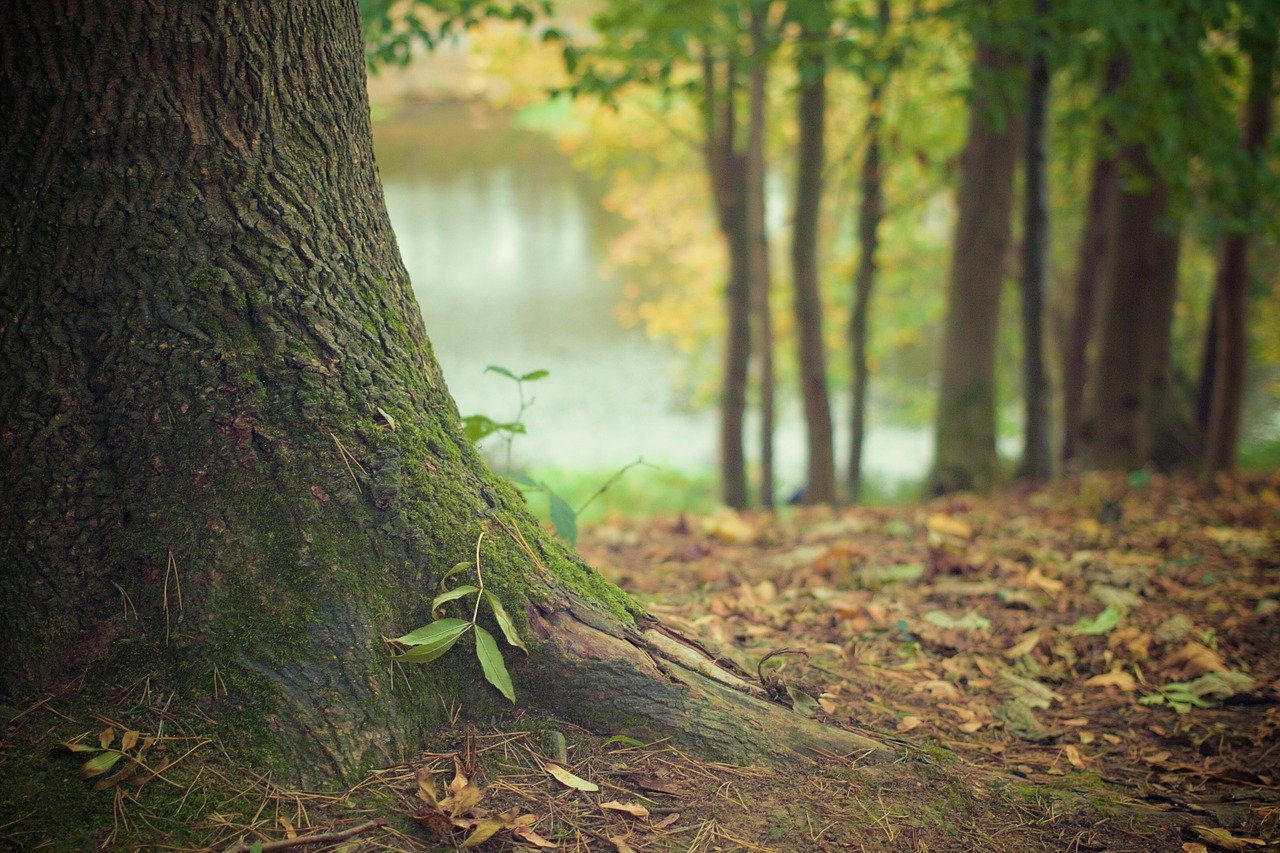 Something should be changed in the building sector so that our grandchildren can still enjoy our home planet in relatively human-friendly conditions.

Let's talk about that...

In a previous article, I gave an overview of the different aspects of this difficult task.
As explained there, it is not sufficient to focus on what happens to our buildings after they have been built.
It is also necessary to:

In this article, I tackle the first of these questions.
It turns out that when we take the whole lifecycle of buildings into account, the materials we use become absolutely crucial, with the use of concrete as the main construction material becoming highly questionable.

Let's begin with an important distinction.

The operational carbon (of a building) means the carbon footprint stemming from the building as it is being used.
This includes heating, cooling, ventilation, etc.

The embodied carbon (of a building) means the carbon footprint of the whole lifecycle of a building, except its operational carbon.
This includes the production and transport of building materials, the construction process, maintenance, repair work and demolition. 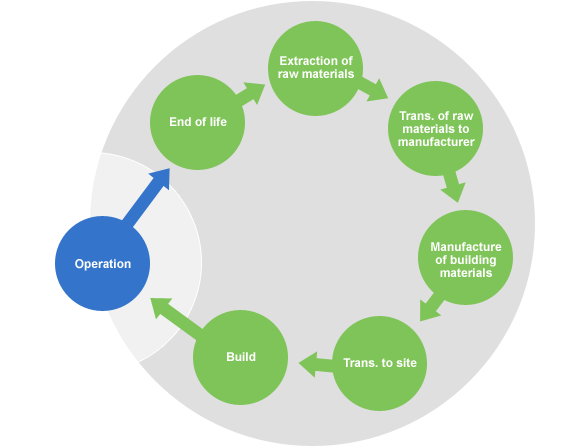 The regulations that are in place in Europe currently only focus on lowering the operational energy of buildings.

So, it is sensible to make operational energy usage as low as possible in order to use less of the highly polluting electricity.

However, with carbon taxes on the rise, polluting types of energy production will inevitably fall out of use and will – hopefully – be replaced by renewable energy.

This would already be a significant step towards lowering our footprint, but it will not be nearly enough to attain the proposed climate objective of +1.5 C rise (compared to the preindustrial levels) by 2100.

The downside of ignoring embodied carbon

The downside of ignoring embodied carbon in buildings is that:

This is why a new concept has been gathering momentum recently.

Instead of embodied carbon, the proposal is that we talk about upfront carbon emissions – that is, the emissions stemming from all the processes that take place before the buildings are taken into use.

The word upfront is used to emphasize the fact that these plentiful emissions will be released into the atmosphere at once, at the very time that a reduction in emissions is most crucial.

To better understand the relations between operational and upfront carbon footprints in buildings, we made a number of comparative calculations using a Life Cycle Assessment tool by Bionova Ltd. We used two examples:

If the office block were concrete, its lifetime carbon footprint would be around 9000 tons of CO2e (in Estonia).

If we replace concrete with CLT, this would cut the emissions by almost half (715 tons of savings in upfront carbon, 9% of the total footprint).

In the case of a private house in Estonia made of concrete, the distribution between upfront and operational carbon would be about equal: 65 tons of upfront carbon (52%) and 57 tons of operational carbon (46%), which would mean 2 tons of carbon (2%) per year.

If we replace concrete with timber framing, we save 45 tons of CO2e immediately (37% of the total footprint).

These numbers would be even more pronounced if we imagine a scenario in which we have clean, renewable energy production, similar to current conditions in Sweden and Norway.
It is true that we are yet to attain these conditions in Estonia, but the buildings we build now will hopefully last long enough to see this future in the coming years, and the sooner the better.

Even if we imagine relatively pessimistic numbers for the clean energy assumed by the OneClickLCA tool by Bionova, we would still see a significant rise in the impact of upfront carbon.

For the private house mentioned above, operational carbon would only be 7 tons (26%), which would mean 0,2 tons (1%) per year, and upfront carbon would take 87% of the total footprint of the building. Substituting concrete with timber would now mean 23% savings in the total carbon footprint in the case of the office block, and 61% savings in case of the private house.

These numbers would get even more persuasive if we took another important factor into account – the biogenic storage properties of different building materials.

It is well known that plants, most notably trees, use CO2 as part of their metabolism, thus effectively capturing it from the atmosphere.

While this process will stop after the trees have been cut down, using trees as a building material would still mean that the CO2e stored in them would not be released into the atmosphere, delaying the detrimental effect for many years. If we took this factor into account, the use of timber construction would additionally reduce the carbon footprint of the office block by 14% in Estonia and by 35% in Sweden.

In the case of the private house, the carbon footprint would be additionally reduced by 48% percent in Estonia and, in Sweden, this would actually make the building carbon positive by 9 tons of CO2e.

All of this makes a pretty convincing case for using significantly more wood in building construction.

Concrete production is actually responsible for nearly 10% of the yearly global carbon footprint of our planet.
So, even as newer, less polluting versions of concrete are being developed (so-called low-carbon concrete), it would be wise to look beyond the misleading expression, for the effect of these new materials is probably still not so low-carbon.

A word of warning

However, it would be wrong to leave this eulogy for wood without some necessary words of warning.

The fact remains that the most sustainable way of building is not to build any new buildings at all but rather to renovate old ones.
Renovating an old wooden private house by adding necessary insulation would have a beneficial effect similar to saving 10 tons of upfront carbon.

According to our calculations, this would mean a carbon positive building by 38 tons of CO2e in Sweden.

Moreover, if we turn our forests into monofunctional wood production factories, biodiversity will take a significant hit and we would lose out on vital ecosystem services.

Breathing and living forests not only store, but capture CO2, and it is necessary always to keep in mind the paradoxes about making new, more efficient products and the myths spread by the wood industry about the beneficial effects of monofunctional forests.

That said, it is vital to use the wood that is cut down most wisely.
The stupidest and most insulting way of using precious wood would be to shove it into our ovens to keep us warm.
The noblest way would be to grow wood of the highest quality in habitats that preserve diversity and use it locally in our furniture and buildings.

Of course, the range of building materials is not only limited to concrete and wood.
I used these two as examples to keep the discussion as compact as possible.

Next to these materials, there is, of course, a diversity of others.

It is with this in mind that the good people at Architecture 2030 have developed a Carbon Smart Materials Palette to get us started.

They also have a dedicated page for insulation materials to drive home the idea that sometimes it is not the construction of a building that has the most impact, but what is between the walls or frames.

To sum up, it is not enough to consider only the operating carbon while aiming for a sustainable planet.

In the nearest future, the upfront carbon – mostly meaning the choice and origin of building materials – will have an even greater impact.
In countries where there are lots of forests (for example Estonia), this would mean that if we need to construct new buildings at all, it would make a lot of sense to use local wood and carbon-positive insulation as their main components.

If you want more information or you have any other kind of question, feel free to reach out to us.