Building a house is no joke. You put a lot at stake and you better be sure you partner up with someone you can trust.
The economic side of a project is one of the factors that weight the most on the feasibility of the entire endeavor. You need to make it affordable …so you seek for the best possible supplier, often ending up in foreign Countries.

But how can you tell if a Manufacturer is trustworthy or not?

Due to their affordable prices and the long history of wooden construction, Baltic Countries managed to become big players in the European Market of Prefabricated Wooden Buildings.

As a matter of fact, in the year 2016, Estonia holds the record in Europe for exported goods and services related to the Prefab Wooden House Industry: 345 million EUR in total.
Lithuania follows as second on the list of exporters with 145 million EUR.
Latvia ranks at place number 6 with almost 56 million EUR in export. 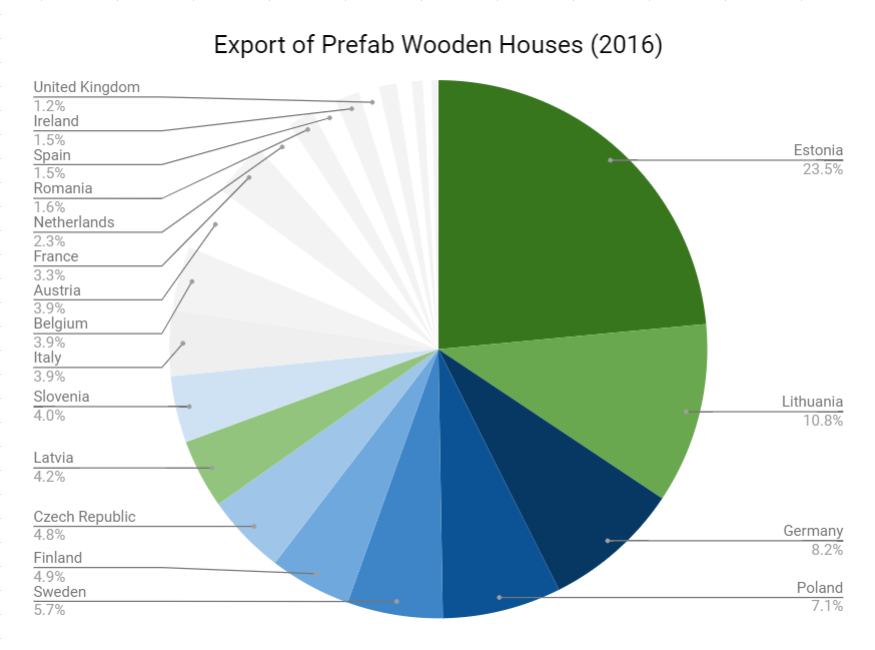 These three Countries (in green in the chart above) are located at the easternmost edge of Europe, all of them sharing a border with Russia.

While the idea of buying a house from a factory located thousands kilometer far away, in a post-soviet Country, might seem crazy to some, numbers speak for themselves: Latvia alone exports more houses than Austria, Belgium, or United Kingdom.

It seems that, despite the troubled political past of the Country, many are the Companies bearing Latvian flag that render professional services to the Market and deliver new homes, year after year.

Like in any aspect of life, going for the cheapest solution often brings unwanted results. Often the cheapest deal hides surprises or serious shortcomings.

When planning to spend/invest money in a major asset, it is always wise to do the necessary due diligence.

Yes, due diligence is important because - no matter which Country you buy from - there are good and bad Companies out there.

So how do you spot the difference between a good and a bad Company?

Look at the References

References are something one cannot fake.

Past projects tell you a lot about the history of the Company and about its experience.

A good Manufacturer is usually able to provide plenty of references.

While you should focus on references for Projects similar to the one you want to build, any successful Project shows, in its own way, competence and mastery in the craft of building factory-made houses.

Let’s take for example the case of “La Foca Latvija”.

The brand La Foca was established in 1958  in Italy by Sergio Oggero. Sergio learned the art of manufacturing houses working as an employee in A-Hus, a Swedish factory in Anneberg .

In the year 2000, La Foca moved its production to Latvija in the attempt to optimize its efficiency and keep serving with excellence Clients from Switzerland, Italy, Belgium, France, Sweden.

Although it specializes in residential buildings, La Foca has done some remarkable work in the public sector.

For the scope of this article, it is worth to mention the Elementary School of Vinovo (Italy), commissioned by the Municipality of Vinovo.

The building of 3.000 square meters, with space and equipment exceeding the standard, has nine classrooms for a total capacity of 290 students. The spaces are designed with children and teachers in mind and organized for the best comfort.

The building was designed with the platform-frame technique that provides greater ease of transport and assembly. In fact, the entire project was carried out by La Foca in just 10 months.

With the Contract signed in November of the year 2008, the building was designed in 4 weeks, produced in 6 weeks and delivered to the construction site by the beginning of July 2009.

It took just six months to design and produce the entire structure.

This is a remarkable result for a building so large that had to be shipped using 25 trucks!

10 skilled Latvian workers were sent to Italy to perform the assembly of the prefabricated elements. The works took approximately 6 months and after that La Foca left the scene while other Contractors were taking care of technical installation and interior finishes.

The Elementary School of Vinovo was a successful project and it entered in operations as planned, at the beginning of the school year in September 2010.

7 years from its construction, the Elementary School of Vinovo is still fully operational and it consistently performs better than other similar facilities built by local Contractors.

The Municipality of Vinovo owes this success to the many Energy efficient solutions adopted in the construction and to the superior attention to detail that La Foca puts in all its projects.

Remember this: if your Manufacturer of choice has successful references in the Public Sector, you generally can trust him to deliver excellent results with a smaller project such as your home.

The most challenging aspect of the Vinovo Project has been the fire-safety aspect.
In fact, Italian Authorities are very strict when it comes to engineering, with particular regard to seismic and fire safety.

After careful analysis, the elements produced by La Foca were certified by the Italian Authorities as REI60 (resistant to direct contact with flames for 60 minutes minimum).

To obtain this certification, elements were designed taking into account both Eurocode and local regulations, over-dimensioning elements and load-bearing posts/beams in a way to keep the structure still standing after 60 minutes of exposure to fire.

For the records, this type of engineering work is not a walk in the park. It is a challenge that many top awarded Manufacturers would not be able how to face without external help.

Another interesting engineering detail successfully resolved by La Foca, is the large multimedia room (33m x 14m) which, by specifications, had to be built without using any column inside the floor space.
On top of that (literally), the roof of the multimedia room had to be a green roof, in order to comply with the strict energy requirements. 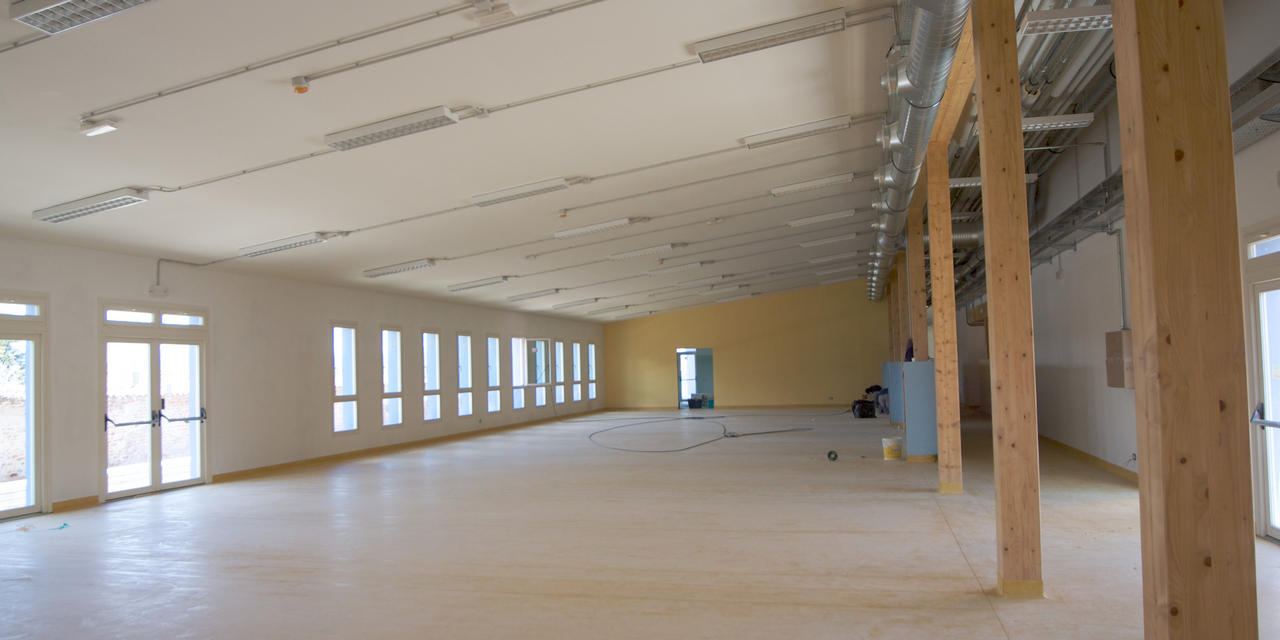 In the end, this is the kind of reference you want to hear from your Manufacturer.

Of course, the story of La Foca cannot serve as a quality stamp for all Latvian Manufacturers but it is a remarkable example of what can be achieved by a small Producer when ambition and heart are in the right place.

With a total staff of 20-25 people, La Foca is able to manufacture 20-50 houses per year, all meeting the most strict standards in terms of quality and performance.

Perhaps the Italian origin plays a part in the success of La Foca but the sales numbers of Latvia, Lithuania, Estonia show that these three small Countries are trusted by the Market as their cumulative turnover for the year 2016 amounts to 38.5% of the volume of export of Prefab Wooden Houses registered in Europe in the same year.

It is indeed a remarkable reference, a reference that should clear any doubt on the reliability of Eastern European Manufacturers.

As mentioned above, you should be careful and always evaluate Companies by their own references and you should understand that, like people, Companies can be good or bad irrespective of their nationality.

Next time you are shopping for a house, don’t stop looking at those Companies that only make small-medium houses.

If you are able to find a Producer with references in the Public Sector, you should try to stick with him… chances are that you will end up getting a better building with fewer headaches.

If you think you need assistance finding a good Manufacturer for your house, just send us your email and we’ll come to the rescue with our expertise ;)