"Tagurpidi Maja": an Upside Down House in Estonia 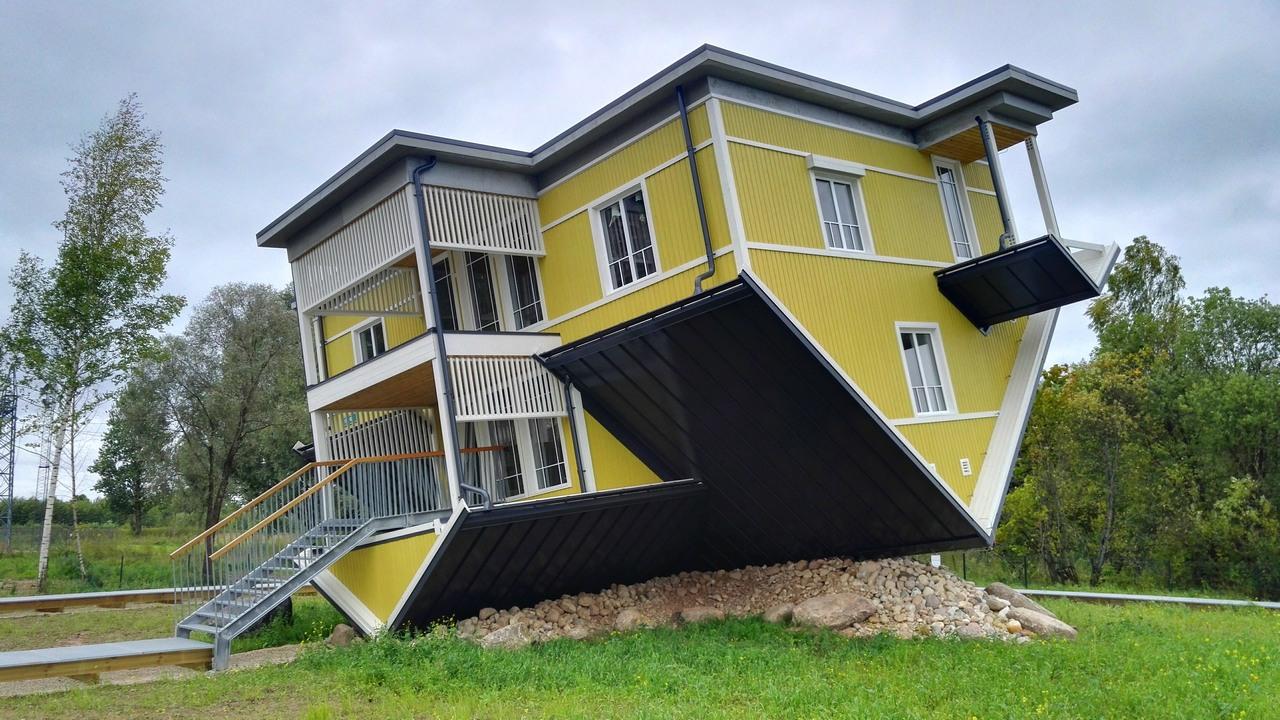 Over the years we have seen prefabricated timber houses of all shapes and kinds… but we were yet to see one that stands on its roof.

It is a little yellow house and it really looks like it was blown there by the wind. White windows shine over the wooden cladded facade, in a perfect Swedish style fashion.
Part of the ridge of the dark metal roof is embedded into the ground and the foundation slab is high in the sky.
It is really weird to see the entrance door standing upside-down five meters above the ground. Mother Nature has nothing to do with the house being upside-down. It was built like that on purpose.
But what could that purpose be?

“Tagurpidi Maja”, the upside-down house in Tartu, is an attraction built with the intention of amusing visitors, offering them a unique experience (in exchange for an entrance fee of course).

This original idea comes from a group of Estonian Entrepreneurs. They saw an opportunity in building an attraction right next door to one of the most visited locations in Estonia: the newly built National Museum. 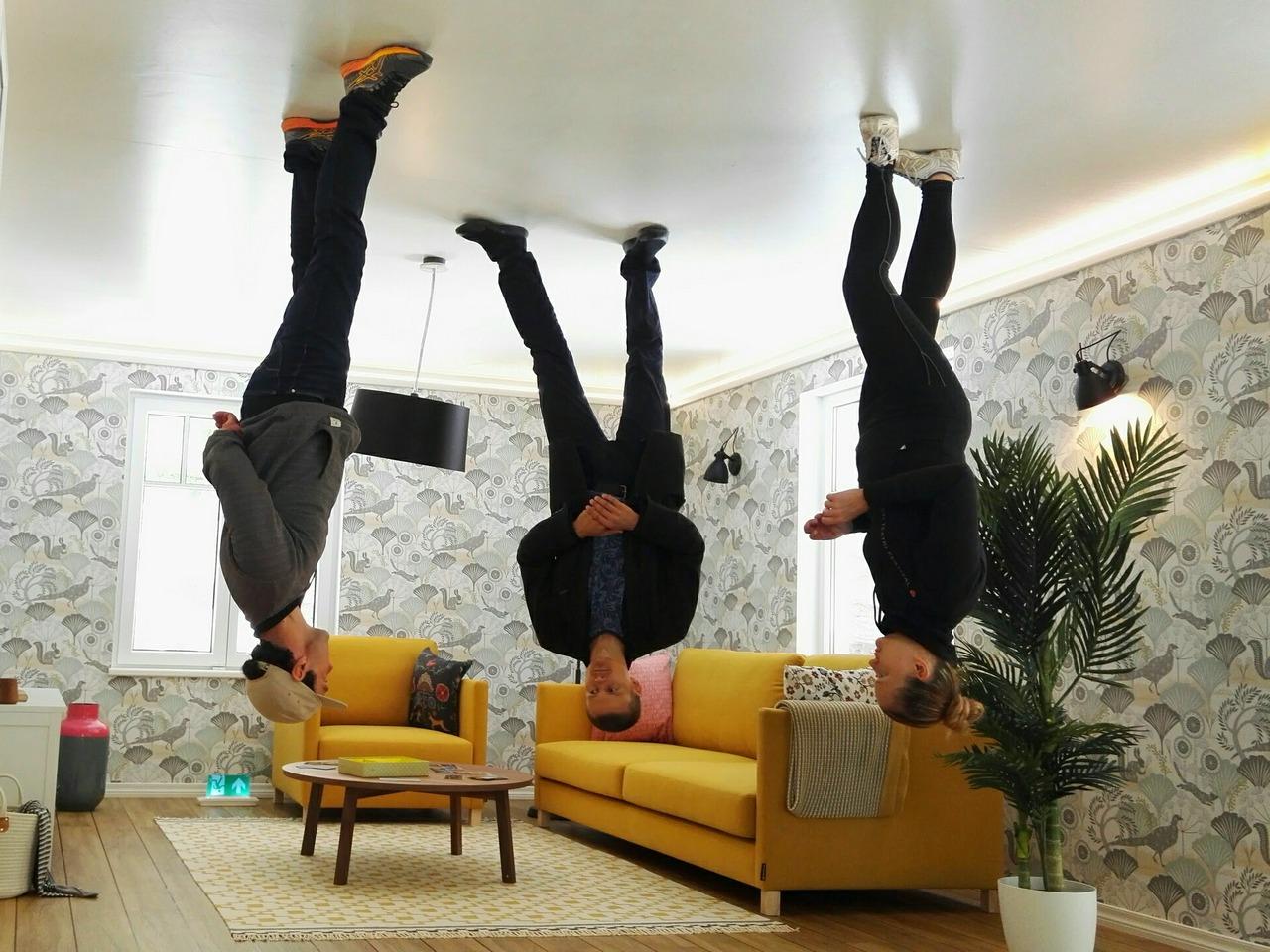 The Entrepreneurs contacted one well-known producer of Prefab Timber Houses (Q-haus Baltic OÜ) and together they worked out a plan to make this idea come to life.

Designing and building an upside-down building was not going to be an easy task - says engineer Anton Balash (www.mainpart.eu), at the time Chief Designer at Q-haus.

The original opening date should have been in October 2016, at the same time of the opening of the National Museum.
However, the planning and construction the upside-down building turned out to be more complex than foreseen and the grand opening was possible only at the end of August 2017.

This is not the only upside-down house on the Planet but it is the first and only in the Baltic States, therefore its opening made a big noise on the Media.

The closest houses of this kind are in Szymbark, Poland (built in 2007) and you can find at least 3 more in Germany (CrazyHouse,  Toppelshaus, Weltstehtkopf). Other famous upside-down buildings are in Florida, Malaysia,Thailand.
However, the upside-down house of Tartu is the only one open to the public to be inclined on two axis.

As result of this particular geometric combination, inside the house no surface is perfectly vertical or horizontal... which creates a sense of disorientation in everyone visiting the building.

Triin Lõhmus works in the house every day and she confessed it took a few days to get used to the "unusual angle" of the building.
Now she feels dizzy only for a few minutes during the first hour of work. 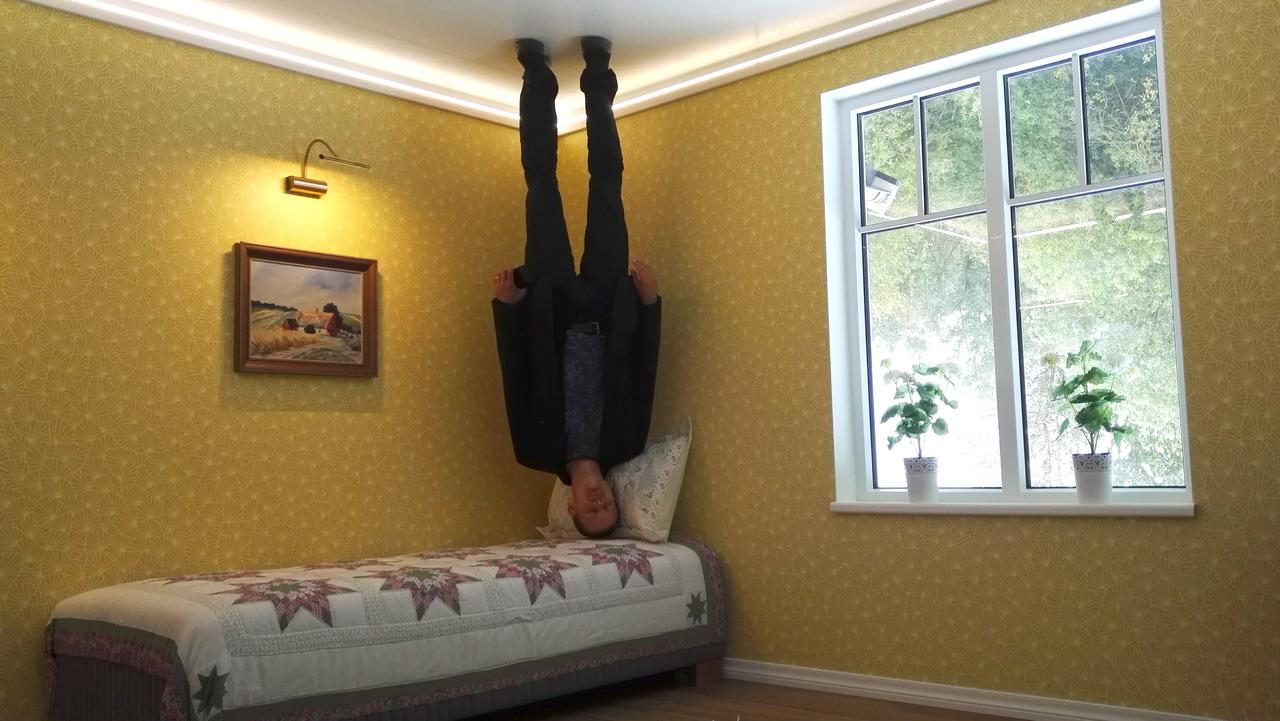 Why one feels dizzy?

It is the combined effect of having everything upside-down and walking on an inclined surface.
The house is inclined by 7° on both axis. That is a lot!
For comparison, the Leaning Tower of Pisa today leans at an angle of just 4°... and whoever has visited the Tower knows how weird it feels already.

Our brain is used to see the interior of a house as a set of straight lines which are perfectly vertical or horizontal. When we stand in the upside-down house, our body automatically finds the right balance for us to stand on our feet. However, the visual feedback processed by our brain tells that something is wrong. The brain suggests we should lean to align ourselves with the walls... and if we do that we are going to lose balance...
Yes, pretty mind-blowing.

Triin guided us inside the house and shared some more details and interesting facts. 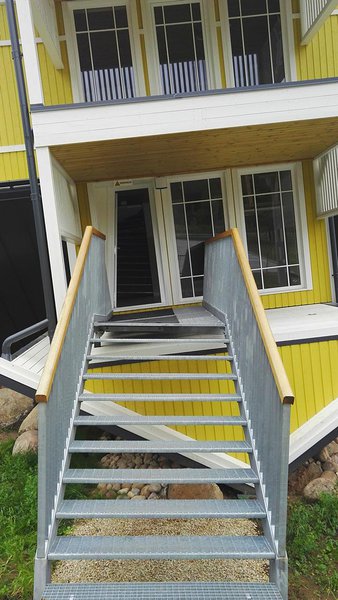 How big is the house?

The building is a regular single-family house and total floor area measure 149 m2.
The interior is fully furnished in Swedish style and it really feels like a real home.

How much did it cost?

This question didn't get a precise answer. However, we were able to understand that the total cost of the building falls somewhere between 300 000 and 400 000 EUR.
A straight regular building of the same size and shape would have cost no more than 250 000 EUR.
Yes, building a house upside-down is indeed more expensive than building a regular one!

What was the biggest challenge?

The extra cost has to do with the extra challenges and the huge amount of steel used for the construction of the load-bearing structure.
Initially, the house was designed to be inclined only on one of the two axis, like all other upside-down houses in Europe.

When the idea came to incline the building on two axis, the complexity of the project increased a lot.

We spoke with Andrei Balash, the engineer from Novarc Group AS who designed the structure. He told us that there are over 12 tons of steel in this construction, most of it hidden in the roof.

Every construction detail in this house has been a challenge - says Gennadi Mišihhin, the engineer who designed the wooden structure at Qhaus.
Since there is no vertical surface in this house, gravity plays a big role affecting every single component. Every joint has to be carefully calculated and it has to be done manually.
This took a lot of extra resources and extra time.

The project would probably have failed if it wasn't for the expert guidance of Qhaus Project Manager Tõnu Kattai, who lead the Team of Engineers in the development of the construction details of the house.
Overall, everyone on the Team who worked on the project is extremely satisfied with the result and they call it a great success. 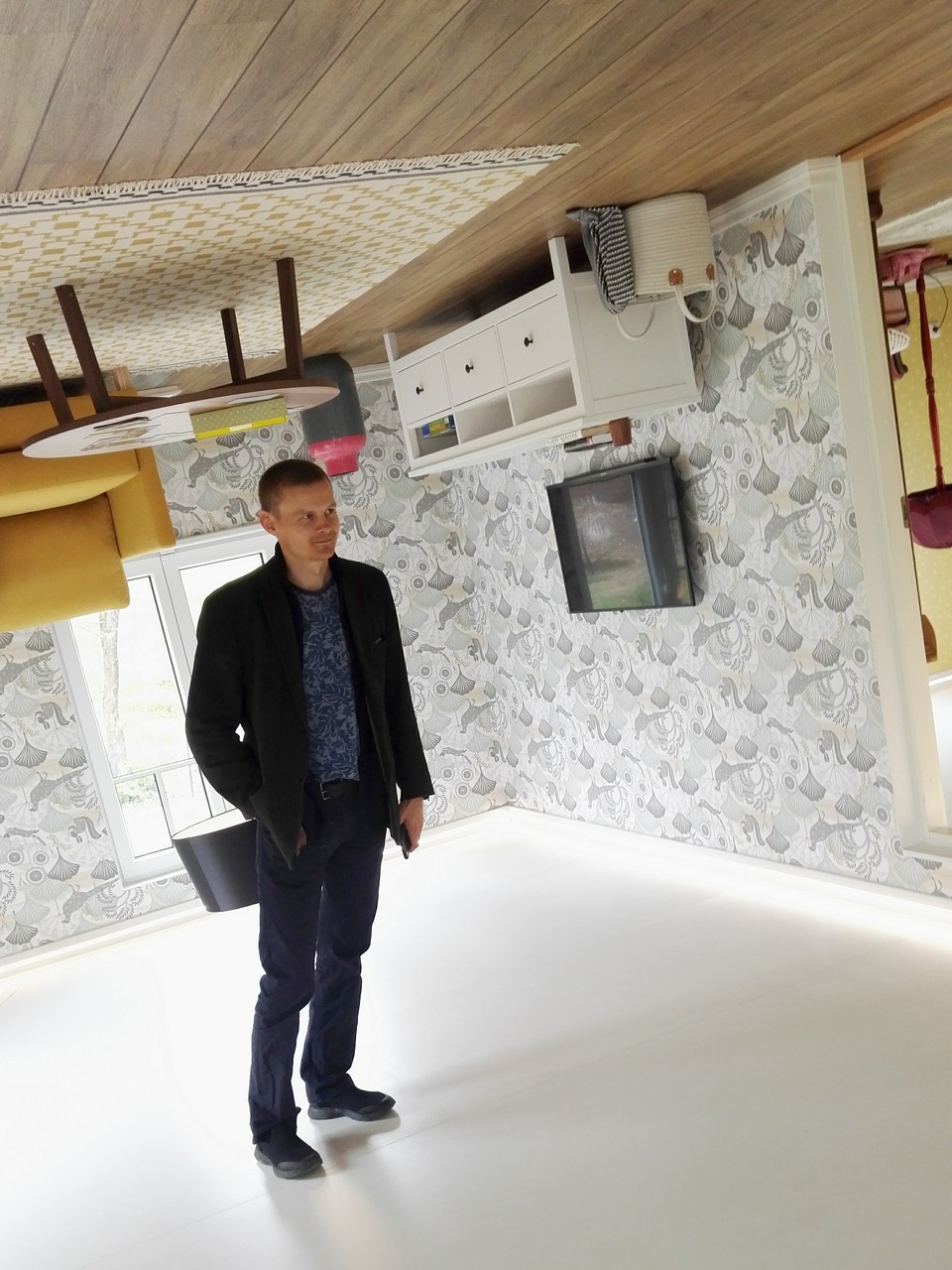 How is the public responding?

"People are crazy about this house!" - Triin says.
When they drive by they stop the car and turn back to come visit.
If they go to the nearby National Museum, they see the house from far and cannot resist coming to visit.

Some of them are skeptical at first... but after they get in they all are excited like kids and very pleased with the experience. 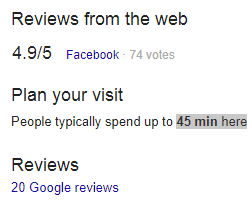 According to Google (yes, Google is still tracking us all) a visitor spends on average 45 minutes inside the building.

Triin is right when she says that people are pleased with the experience: the rating on Google scores an outstanding 4.9 out of 5!

Do you target domestic Market or Tourism?

Although almost everyone could enjoy a visit to Tagurpidi Maja, visitors getting to the house are mostly coming from the nearby National Museum.

Kids are the “driving force” for the visits as they easily get super excited seeing the building. They then start pushing their families to spend an extra hour (and a little more money) to visit the upside-down house.

There are many Tourists visiting the National Museum, mainly Latvians and Russians, but also a lot of Estonians.

Kuldar Leis, the CEO of Tagurpidi Maja, says one of their plans is to help Estonian schools, providing educational visits to the house in the frame of micro-courses about physics and building concepts.

How many visitors do you plan to have?

In 2016 the National Museum registered 300 000 visitors.
All these people are potential visitors for the little Tagurpidi Maja… but of course, not all of them will be able or willing to visit the little yellow house.
These big numbers are just speculations.

However, everyone has been positively surprised by the number of visitors registered in the first weeks of operation (August 2017).

They told us that on the first weekends they registered over 1000 people per day. Considering the average cost of a ticket around 6 EUR (5 EUR for groups and 7.5 EUR full price), that could repay the entire investment in the course of just two years!

It is a brilliant investment.

Which is your Marketing Strategy?

There is hardly one at the moment. It has not been necessary.
From the very first day, the house has been selling itself.

Of course, there are Marketing activities planned for the future but the response of the public has been so strong and positive that the budget allocated to Marketing will probably have to be revised (less than planned).

Why did you choose a traditional architecture over a more modern one?

"We did not want to be disruptive" - says Indrek Taukar, the Architect of Tagurpidi Maja.
"An upside-down house is already something very unusual and so we wanted to give people an element of traditionalism they could connect with, hence the traditional Swedish style in yellow."
Given the very positive feedback, this choice seems to be a winner.

We did not stop at the first positive feedbacks and we tried to dig deeper, listening to the opinion of those who do not really like the yellow upside-down house.
It wasn't difficult to find a few authoritative voices that do not agree with the general public.

Karin Bachmann, landscape Architect at OÜ KINO, says:
"an upside-down house is, at first, entertainment. Definitely a good spatial experience, but not a quality one. This solution has nothing to do with the space it is located in... it is like a parasite laying on back of the museum. #ArchitectureGoneYellow."

Anna-Liisa Unt, Urban Design Specialist at Tartu Municipality, comments :
"I personally do not like it. It should not have been built. The fact that upside-down houses have been built once somewhere else, does not mean that we should embrace it and copy it. Though, I must admit that interior design is beautiful."

Will the hype last?

This is an open question and indeed we will come back to review this object one year from now.

We are particularly curious to see if the business associated with it stands the test of time and if the prefabricated structure of the house will stand the challenge of gravity over the long run.

From our side, we can only recommend to visit the house and not to be shy to take mind-blowing pictures!
However, as one of our goals is to promote good contemporary architecture, we are really waiting for the first contemporary upside-down house...