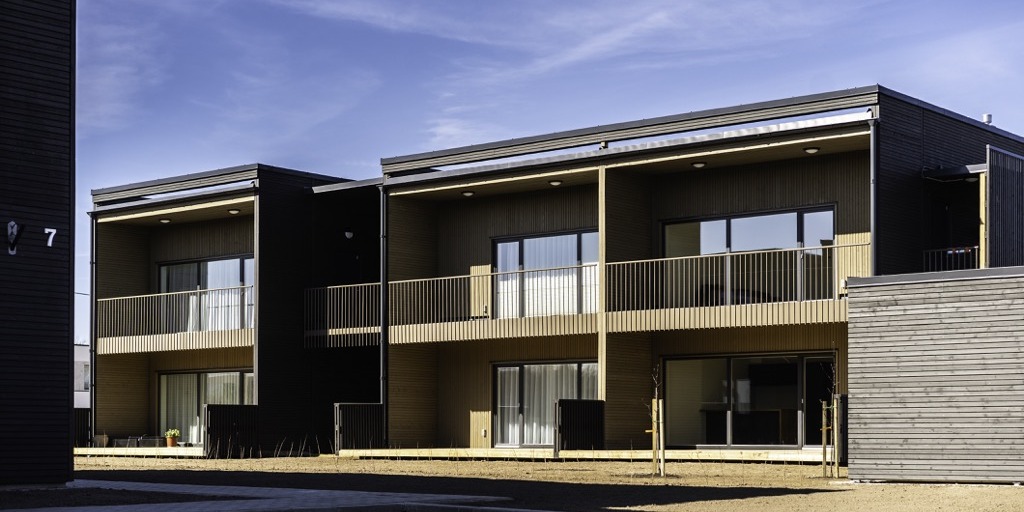 The Estonian timber house industry is well known. The industry is one of the few in Estonia that exports most of its production.
Estonians were involved in the construction of the tallest timber building in Norway (80m).
Today, thanks to Matek - custom-made prefabricated timber frame house producer - Estonia has a perfect exemplar of a prefabricated apartment building, built using modern technologies and in a way to satisfy the needs of the real-estate market.

Over the course of 30 years, Matek has been building in several Countries across the entire Europe.
Most of its houses can be found in Norway, Finland, Sweden and Iceland.
The apartments designed by architectural studio Sport and erected near Tartu city center in the upmarket residential Kvissentali district are some of the few examples one can find in Estonia.

Matek CEO, Sven Mats says that one of the aims when building these houses in Kvissentali was to have a showcase of what the company can do.
“This is the first development in Tartu, but we have had similar projects in Pärnu and Tallinn”, he says.

Houses in Kvissentali have a long and interesting history. Sven Mats once had a friend who lived in a house designed by Tiit Sild, the architect in architectural studio Sport, so when visiting the friend the house caught Mats’ eye. When the company bought parcels of land in Kvissentali and it turned out that the same architect had also made a general plan for the district, there was no doubt as to what next move should be. Sild introduces his philosophy, saying that he likes to create space that a lot of people can benefit from. Prefabricated timber houses are one of the ways to fulfill that dream.
He adds: “I would like to be an architect who designs affordable everyday spaces, meaning that the necessary living functions are provided within a rational size, but good quality. I like this part of architecture.”

So Kvissentali apartments are rational and elegant in the Scandinavian style at the same time.
Altogether there are six buildings with 36 apartments. 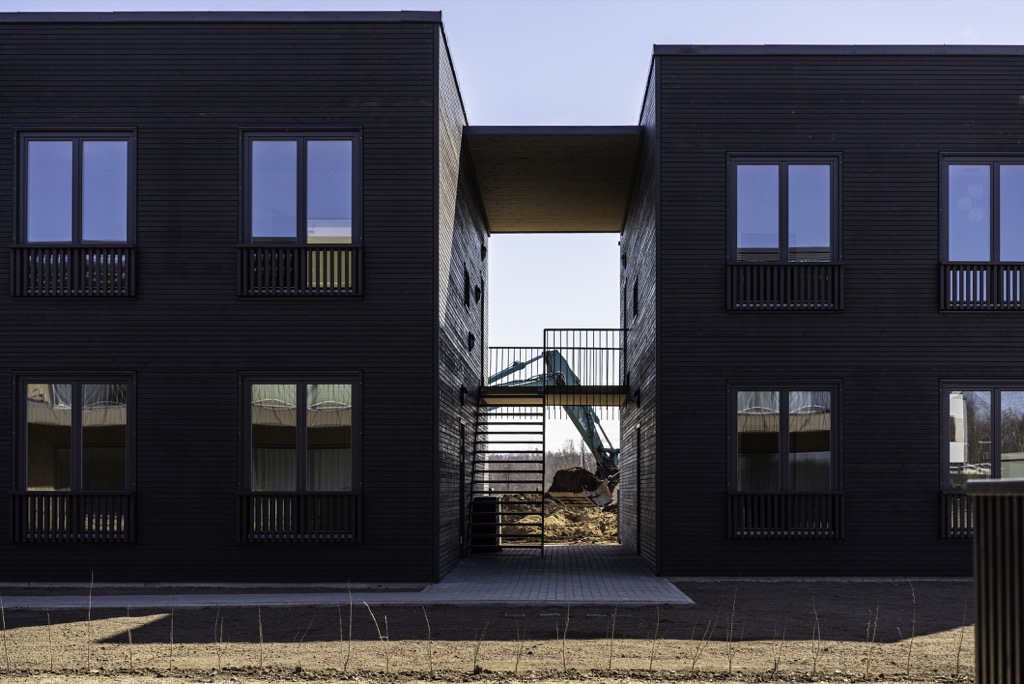 Managing director and real estate consultant for 1Partner Margus Kelk, also agrees that architectural design, Scandinavian style, a calm atmosphere, colors and rational proportions are all aspects that make the houses in Kvissentali stand out.

“Building rules as well as the architectural design of Kvissentali are both by architect Tiit Sild. So altogether the area is very well worked through at every scale. The neighborhood has a complete look, it has friendly architecture and ample street space” said Kelk, introducing the area.

‘The devil is in the detail’ is a saying that also characterizes Kvissentali apartments. 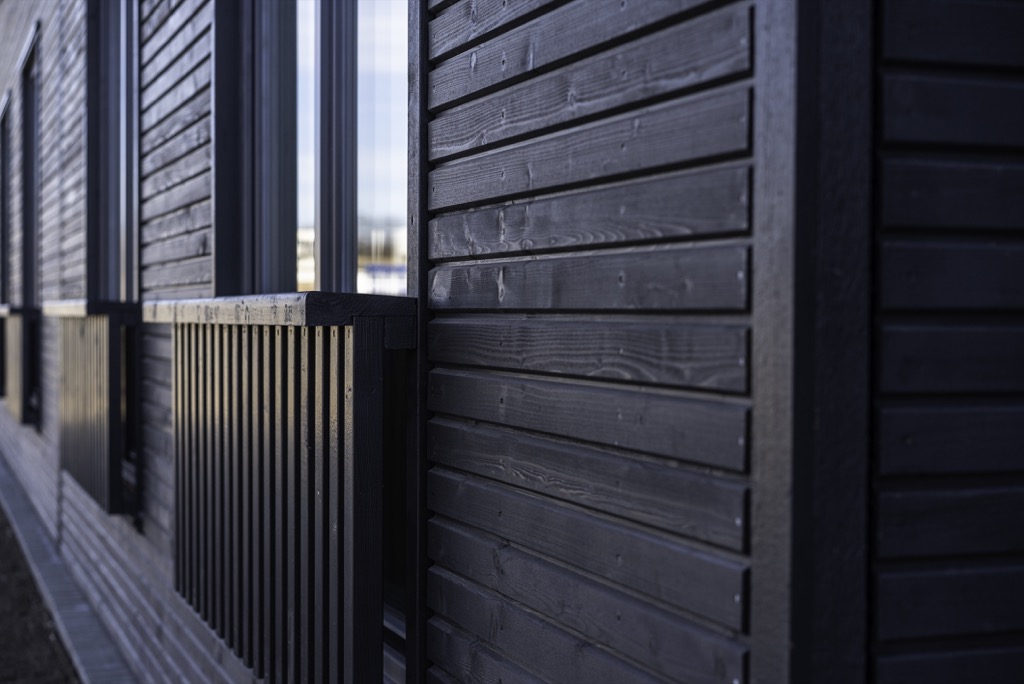 Sven Mats mentions the vertical wooden slat detail that covers the connection point of two apartments on the façade of the building.
“Usually the slat is just put on top of the other façade material. We put it on the same level as all the other façade. These small details create a look that is harmonious and whole" he says.

Martin, a local resident says: "me and my wife both come from the construction sector. We believe the building quality of these factory-made houses surpasses what could be accomplished by building everything on-site. We also liked the architecture: the division and distances between two housing blocks create more privacy and the fact that each apartment has no shared walls with neighbors guarantees less noise (everyone knows neighbors can be noisy at times)". 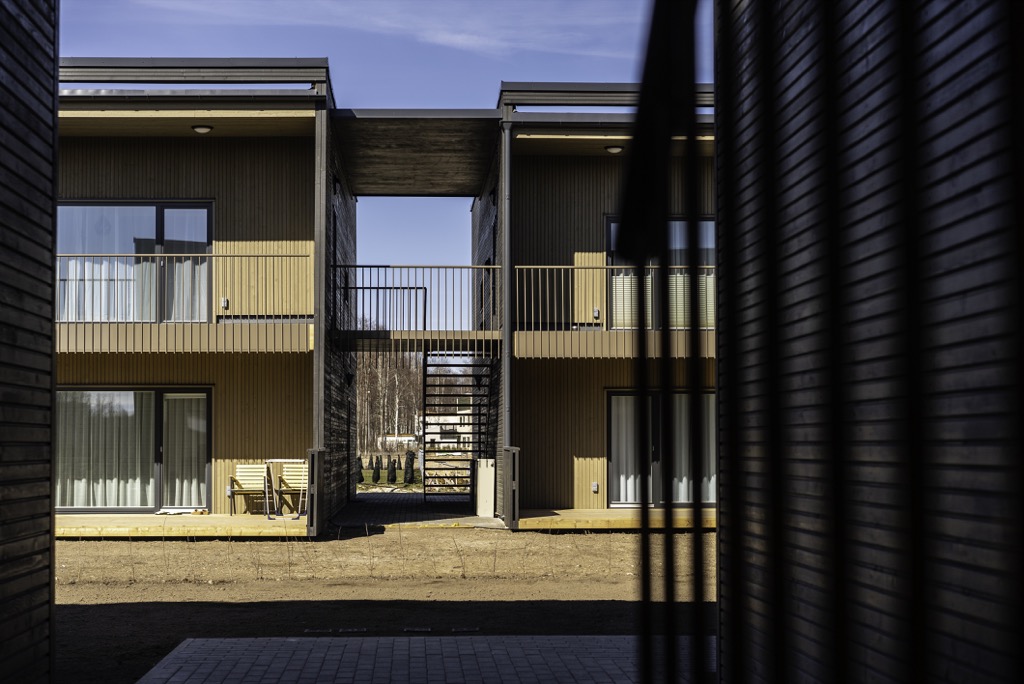 Having a prefab wooden house has a lot of advantages. One of them is the fact that almost all the details and joining parts have previously been tested hundreds of times. As an architect, is also very grateful for this.
Sven Mats says that the joining parts they use are standard solutions for them and that everything is reliable.

Matek factory has 30 years of experoence and it produced over 9000 buildings.
Mats says: “When I started to work for the company 15 years ago, we invented everything when a project came in. It took us a lot of energy to have the right solution. At some point we saw what was working and what was not, so we sorted out the ones that were technically perfect, practical and visually neat”. 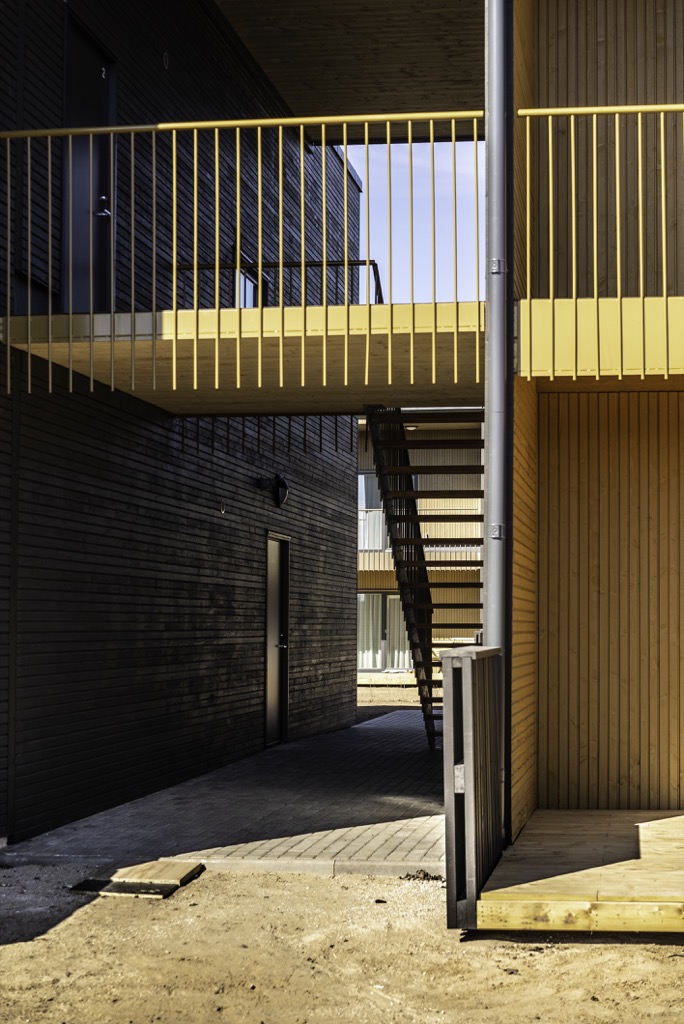 Tiit Sild also appreciates the standardization as he believes it guarantees quality.
“I like the fact that when you repeat one solution several  times you can always enhance it, fine tune the detail” he adds.

When talking about prefab houses we also need to talk about the myth of cheap housing. It is constantly thought that prefabricated timber houses are much cheaper than stone or concrete houses. This is not the case.

Probably this is why the Estonian timber house industry relies mainly on exports. But the situation is changing and Kvissentali houses are one of the examples of new trends.

Margus Kelk agrees that so far the market for prefab factory houses has been a little slow because of the high cost.
He highlights how the greatest advantage of prefab houses is the building speed on site.
“It will probably become the most convincing selling argument in the near future” he says.

Sven Mats agrees and cites the example of Kvissentali apartments and how they had a roof in place within two days.

The kind of speed in only possible when much of the building and detailing is done at the factory. For example, Matek produces elements like the floor, ceiling or roof, as well as spatial elements.
“This house was prefabricated as much as possible. We can say that it is the most that we can do at the moment. These houses look like houses and are weatherproof and under a roof in only two days”. 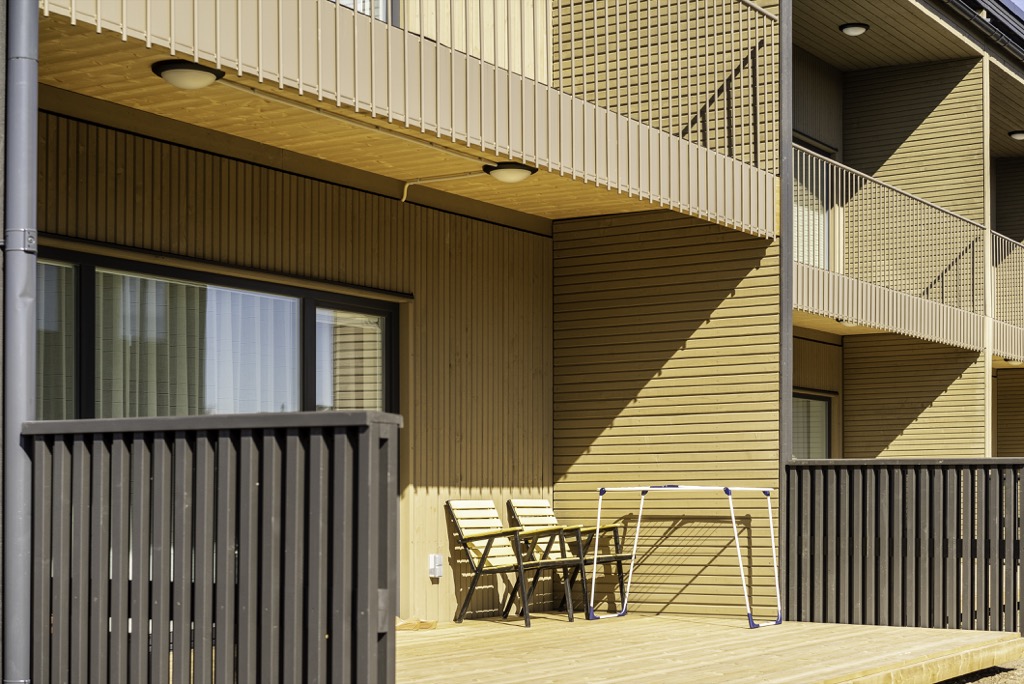 Nowadays we cannot talk about building a house without mentioning energy efficiency, energy labels and maintenance costs.
Sven Mats says these Kvissentali houses are being built as low-energy buildings.
He explains: “We have a wall insulation layer 250 mm thick, and for the roof and ceiling, half a meter thick. It is the optimal Scandinavian way. I believe it is reasonable”.

The houses are rated as C energy class. “We discussed making the houses conform to B class but it would have taken another 3000 euros per apartment. We decided to invest the money in kitchen equipment because we figured this would make customers happier than having solar panels on the roof”.
It was a right decision in the long run, confirms real estate consultant Margus Kelk.

Kelk says that customers prefer these apartments because of the good interior finishing of the bathroom and because of the kitchen facilities.
“What we have here is basically a complete solution: one can move in without fussing about the most important rooms in the apartment. It is a big thing for a customer” he says. 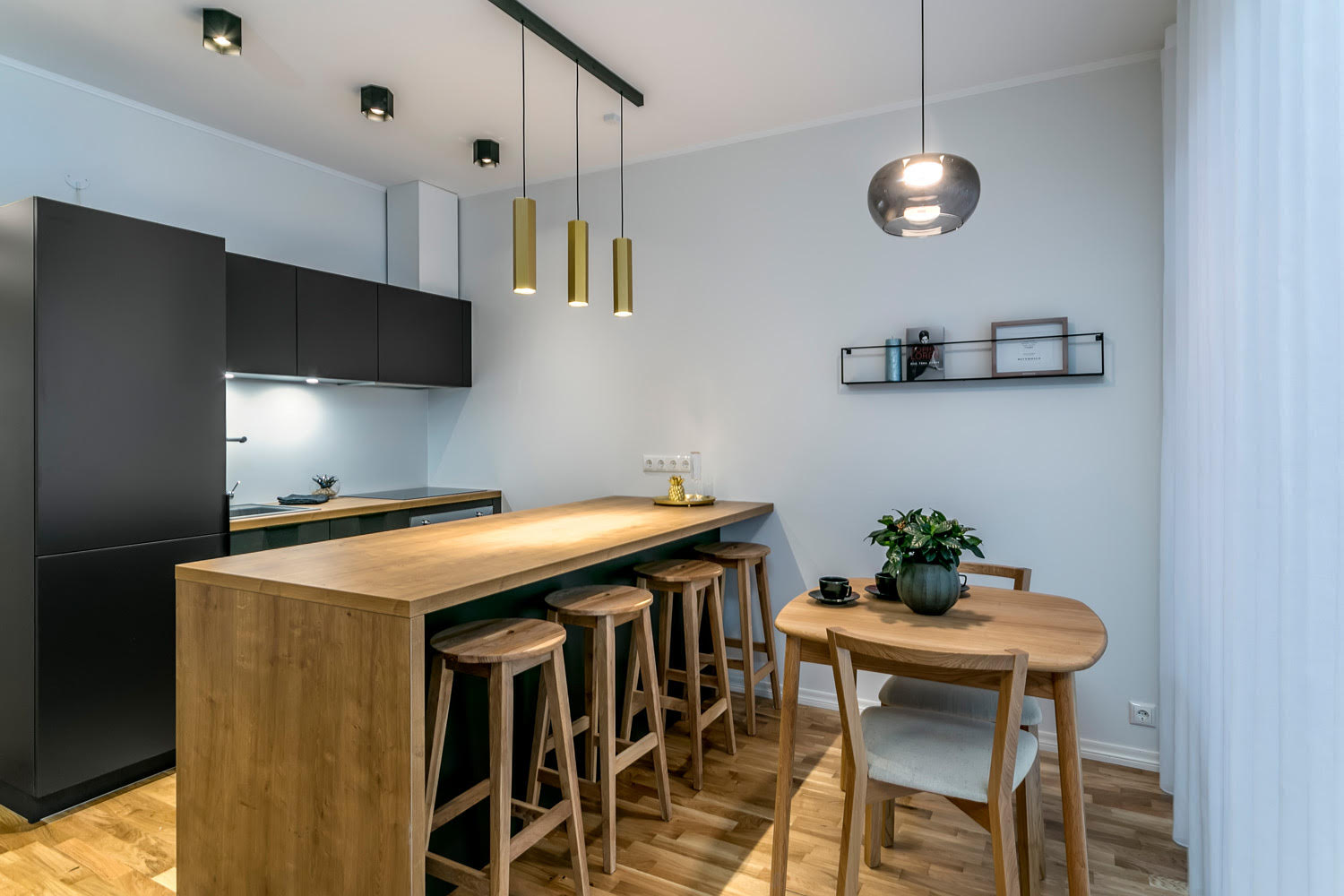 Kvissentali two storey apartments provide optimal space and good configuration. These are the first in a series of similar apartment houses not only in Estonia but also abroad.
On the basis of Kvissentali houses Matek is planning to erect similar buildings in Kiili, near the capital Tallinn.
“We are modifying the project a little, we want to build eight apartment houses in Kiili. But we are also thinking about using the project to design three-storey apartments or a terraced house”. Sven Mats concludes.

If you want more information about Modular Buildings or you have any other kind of question, feel free to reach out to us.