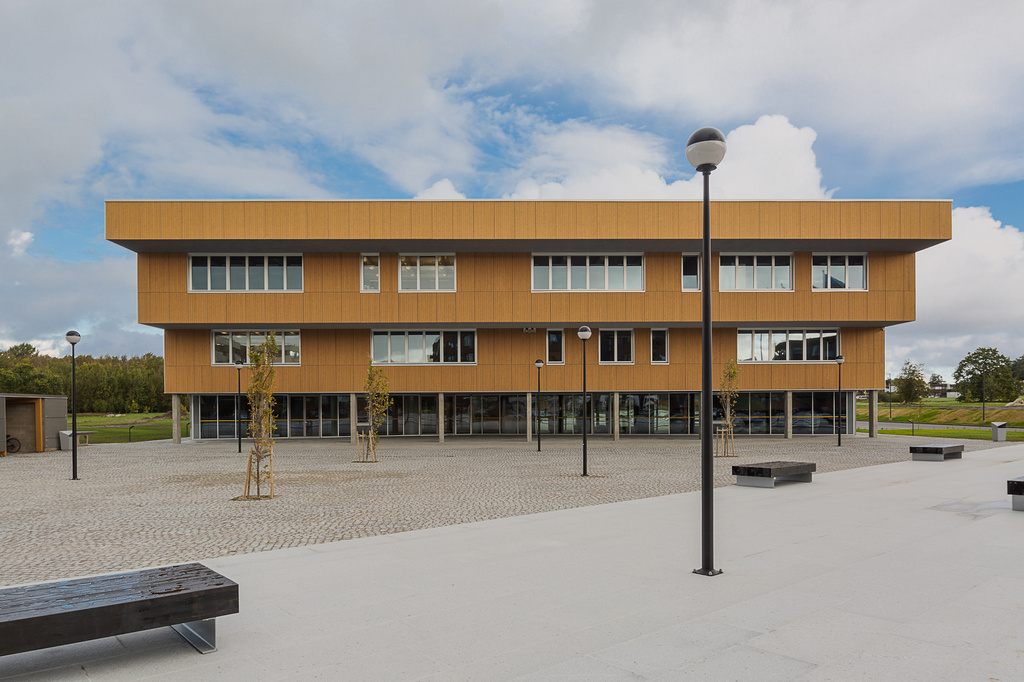 Historically, timber has been a popular building material for schools in the Nordic countries.
In Estonia, the advent of new materials brought a pause of about 100 years in the construction of wooden schools.

This pause was finally broken in autumn 2018 with the construction of Viimsi State Secondary School by KAMP Architects: a stunning CLT building which also became the largest wooden public building in Estonia. 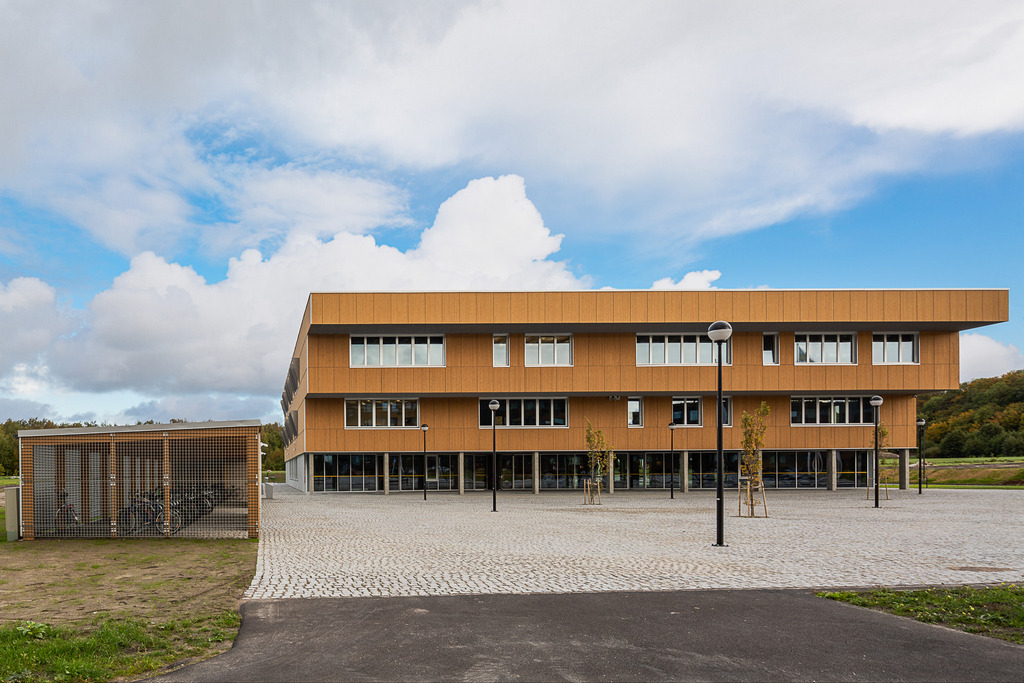 The architects Jan Skolimowski, Peeter Loo and Kaspar Kruuse won the architecture competition for the school in summer 2016.
An important push for using timber came from a trip they took to London where they primarily visited new wooden buildings.

"Seeing how many and how large wooden buildings were constructed there, we were encouraged to try it also here,” said Kaspar Kruuse.

“In the selection of the material, we obviously also considered the environmental aspect. Both in terms of raw material, production, transportation due to lighter weight and the energy consumption in the foundation. Actually, wood building, in other words, sustainable construction and the decrease of CO 2 emissions are one of the main goals in the EU. And it is to the state’s credit that their commission has materialized the slogan-like goals in the form of a real environment”. 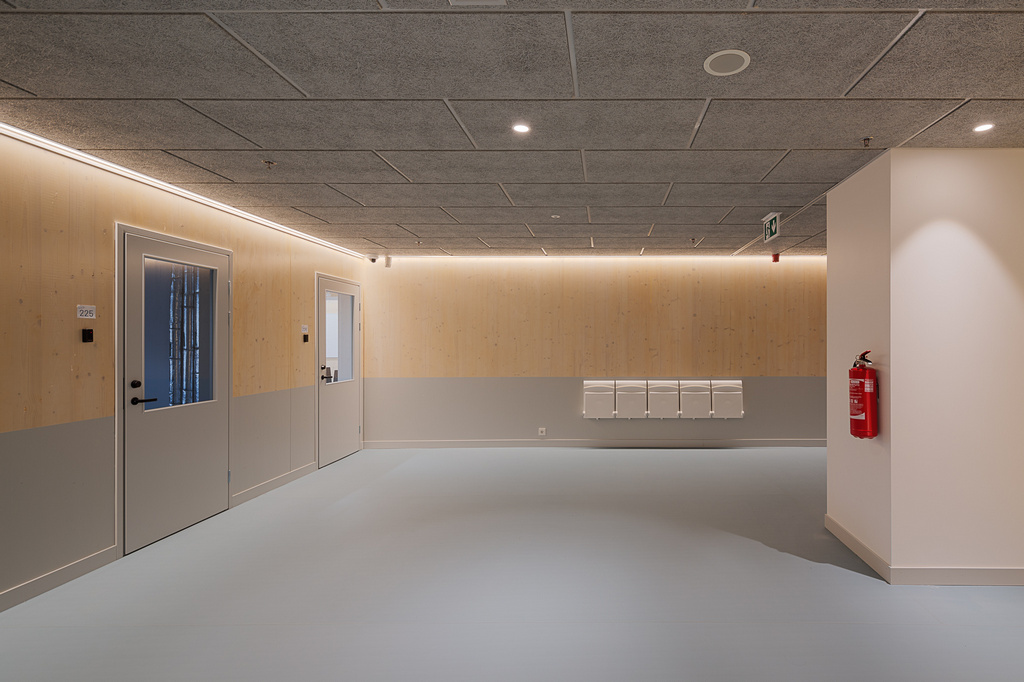 Although historically, the timber school buildings were made of logs, Viimsi school was built using a modern timber material: cross-laminated-timber, also known as CTL.

Architects are fully aware of the good properties of log constructions. They highlighted the excellent example of the historical log house in the new school in Tuusula, Finland (Aarti Ollila Ristola Arkkitehdit) which will be the world’s largest school building made of logs.
However, they thought a CLT building would suit better this application.

The Project Manager from the construction company (Merko) said that if it had been built in the usual way, they would not have completed the school in time. Using CLT allowed them to build faster.

Also, according to RKAS (the company managing the property), this is their least expensive school when measuring in cost per one student. 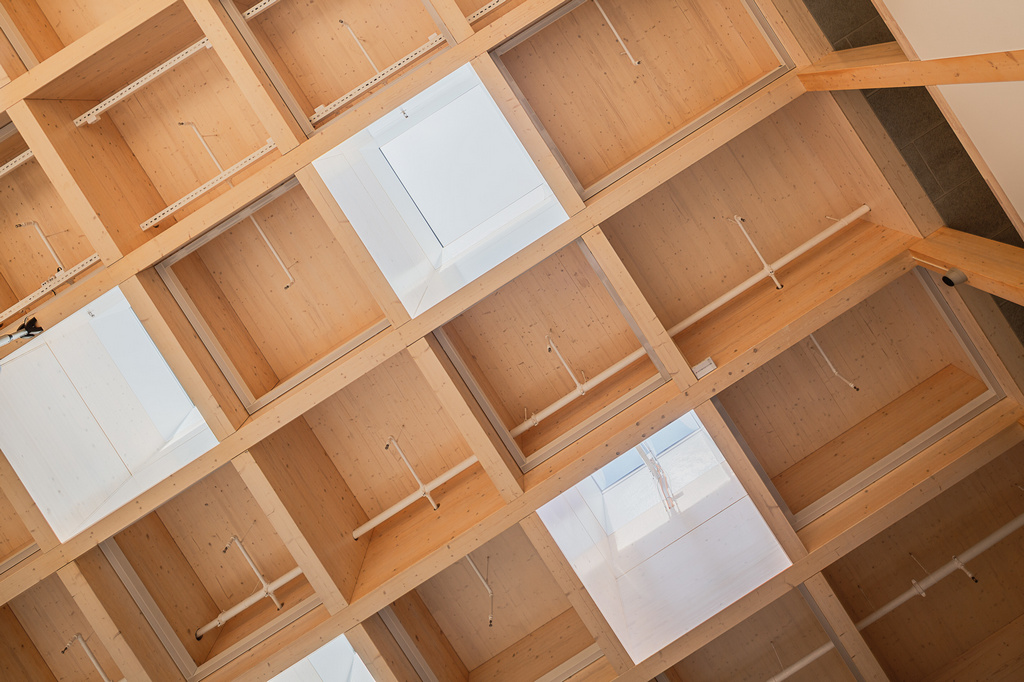 Timber in the leading role

Instead of log or timber frame structures, they used large CLT panels manufactured in a factory.
Highly popular pretty much everywhere in the world, cross-laminated timber is now used in Estonia as well, primarily for the construction of smaller buildings.

As a CLT building, the main role in the architecture of this construction is played by timber. Concrete and metal play a secondary part helping the wood to cope with structural load and weather elements. 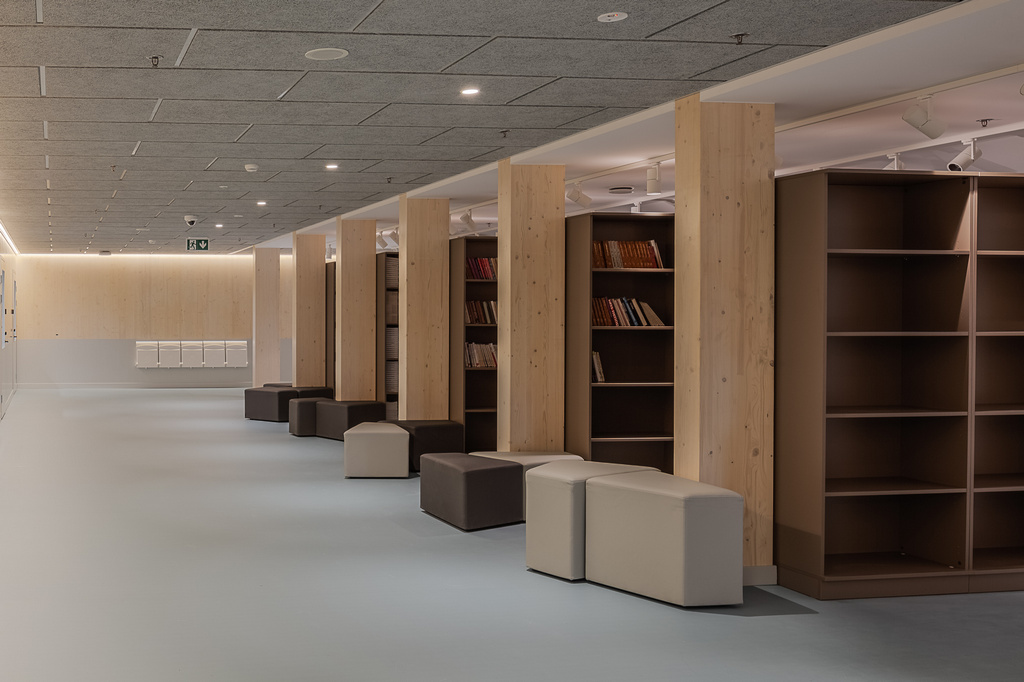 The ground floor is made of concrete. The timber construction begins on the second floor where the building has less contact with the moisture stemming from the soil.

Architects stress that in the case of timber buildings, a crucial role is played also by the construction company. The best builders have a lot of experience but also the willingness to test new things. Timber has its own specific features as it is a “living” material. Its reactions to moisture and sunlight need to be considered in joints and finishing materials. 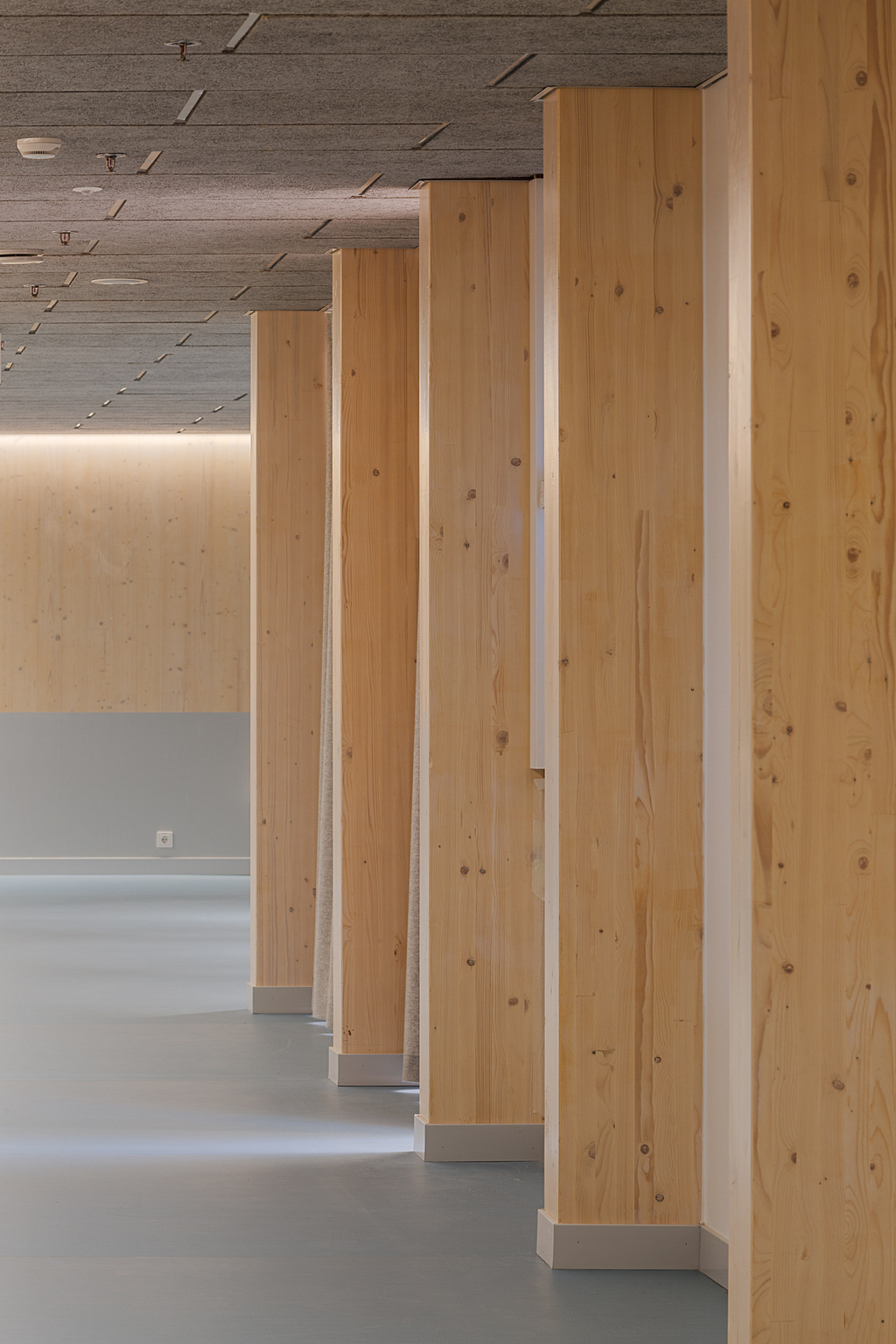 The timber parts of Viimsi state secondary school were built by the installation team of CLT manufacturer Arcwood. As the company is specialized in cross-laminated-timber, there were no problems related to the unusual size of the building or other aspects.

It was also the largest timber building for the architects in their career. Earlier, they have used CLT and its analog MHM (cross laminated material assembled with nails instead of glue) in some private houses. Today, they have developed larger timber construction projects further. 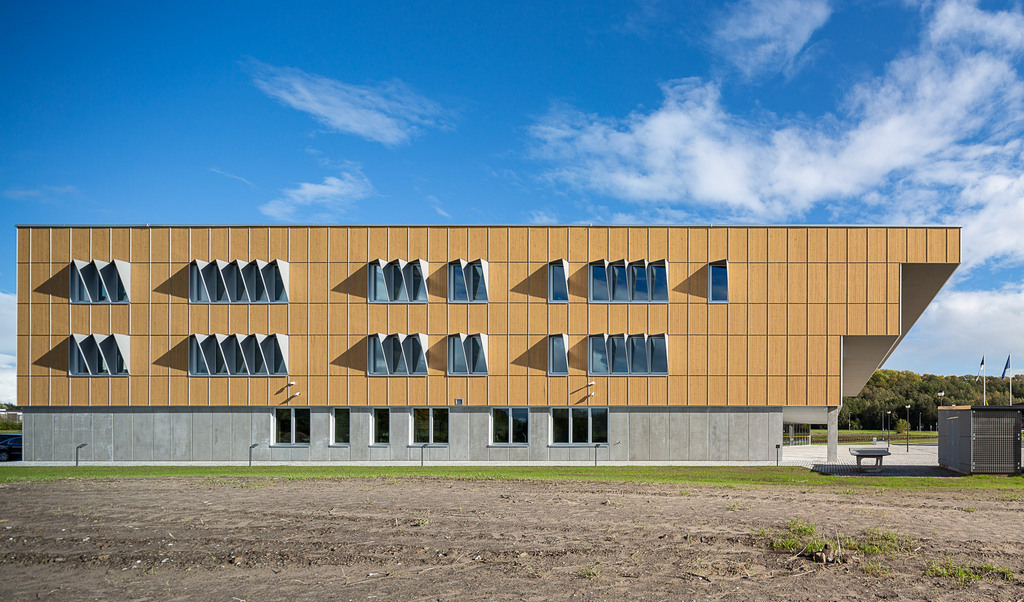 Timber as construction material was only one of the aspects reflecting the main objective of this massive CLT building. The objective was energy efficiency.
The architects focused also on optimizing the form factor of the building, keeping the external perimeter and surface to the minimum.

“From the perspective of energy use, we wished to avoid excessive direct sunlight as cooling is generally more expensive than heating”, Kaspar Kruuse points out.

“The horizontal cantilevered floors on the south side shade the midday sunlight at its highest point. The windows on the east and west side have vertical triangular metal shades protecting against the low morning and evening sun”.

When comparing the new school with the former building, one of the tenth-graders pointed out that the new school is considerably cosier and more compact than the previous building, while his eleventh-grader peer noted that it took some time to get used to the smaller building providing less natural light but it soon became very cosy. 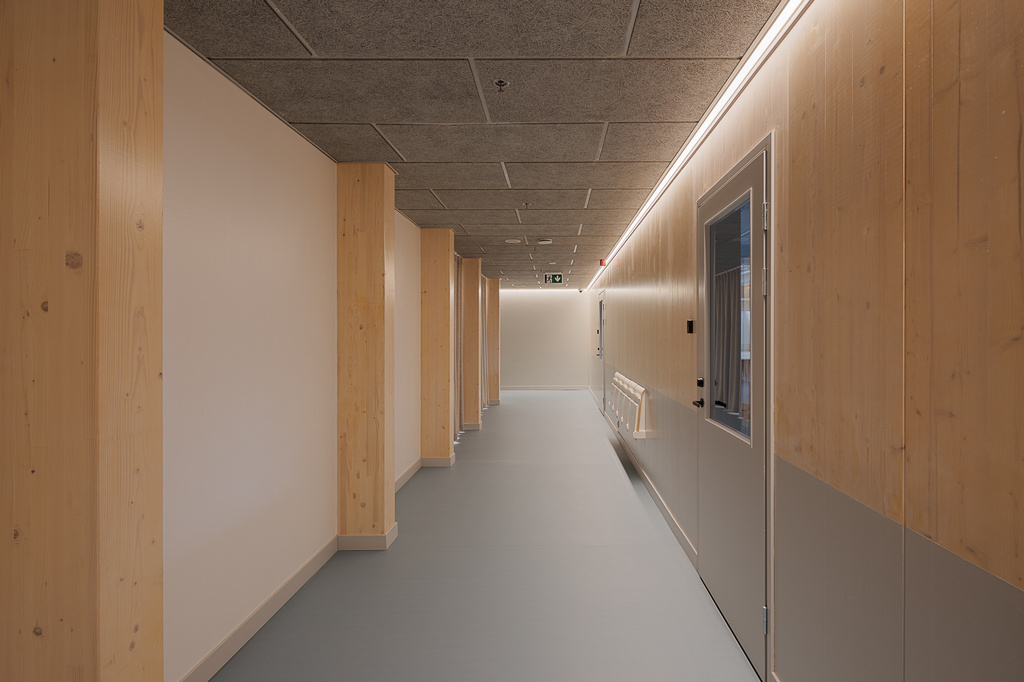 In addition to all the technical issues, they never forgot the aim to create a good environment within and around the building.

The methodology of teaching and learning changes constantly, therefore the space should allow various possibilities. Mere corridors with classrooms are no longer sufficient.
In an effective school building, a lot of thought should be given to the use of space. There should be some randomness or potential for changes, even some excessive space to allow new uses to emerge.

“Today, expectations for school buildings are considerably more versatile, but it is important to leave room for movement also in the classroom. Although the size of classrooms is optimum, it is possible to rearrange desks so that students could also move around during the classes”, says Merle Nestra, head of communications of Viimsi Secondary School. “When designing Viimsi Secondary School, we went to see other state secondary schools that were already completed. The school in Viljandi (Salto Arhitektid) is an excellent example that keeps the users, administrators as well as other architects very happy. As to the most recent schools, we must naturally mention the Estonian Academy of Arts (Kuu Arhitektid). It is precisely the kind of free space open for various possibilities that is needed. It does not mean wasting space, but each square meter can be used for various and changing needs,” Kruuse said.

In Viimsi Secondary School, there is a large open space in the middle of the building extending over two floors with a grandstand and a surrounding balcony that can be used either as an auditorium or a recreational area. As the hall has no external walls, the architects designed a glue-laminated beam grillage with numerous skylights. In addition to the great hall, they provide also the surrounding corridors with daylight. 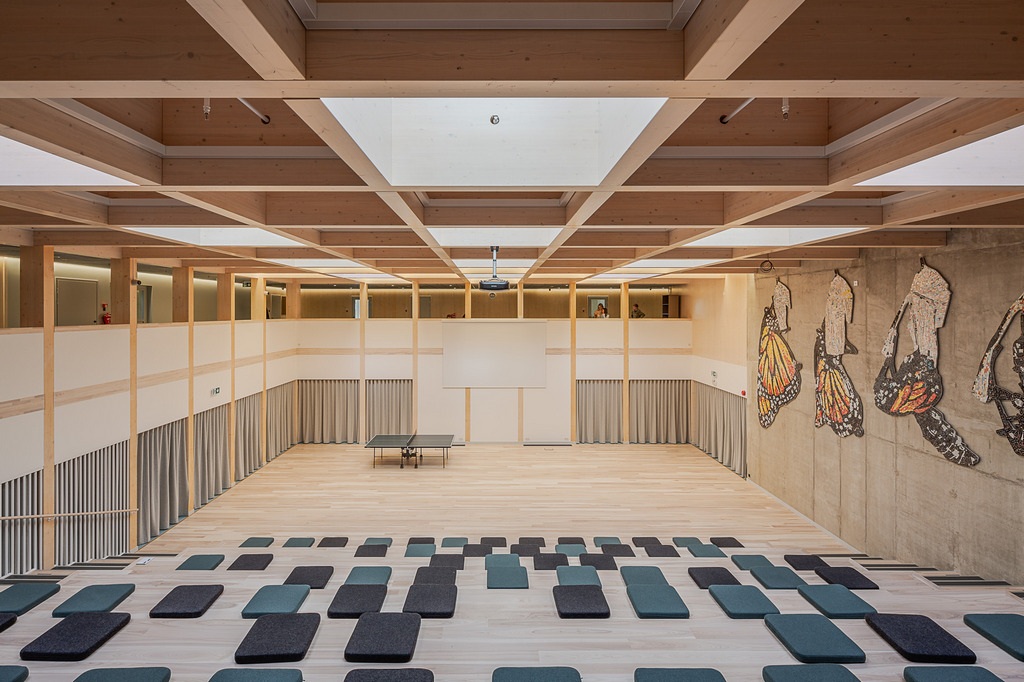 Merle Nestra says that the students and teachers quickly adopted the atrium in the middle of the building and she considers the space as one of the greatest advantages of the building,

“People enjoy spending time there, learning, communicating, playing table tennis etc. Similarly, it is comfortable for lectures with a larger audience and the events have always been successful”.

The initial idea also stressed the cosy and healthy indoor climate of a timber building, which due to highly strict fire safety regulations was unfortunately somewhat lost underneath the thick coat of fire protection varnish. Timber absorbs humidity and also gives it out well as the room dries.

Merle Nestra says that as the building is new, they have not had the opportunity to experience it throughout the year, however, based on their experience so far, she can confirm that the indoor climate is good despite the coat of varnish.

“We haven’t perceived any problems with too dry or too moist air or anything similar,” she confirms.

In a school building silence is highly important during classes and, although sometimes people worry about the low acoustic insulation of timber, they have been very pleased with the soundproofing of their new school.

If you want more information about Viimsi School or you have any other kind of question, feel free to reach out to us.