A man puts his money on the line.
A Company stretches its reach to unknown territory.
A deal is made.

This is the story of how Avrame, an Estonia based House Kit Manufacturer, built a house in South Korea...

When Mr. Hyeon-su Kim started to think of buying an A-frame house from Estonia, the distance seemed impossible to overcome. 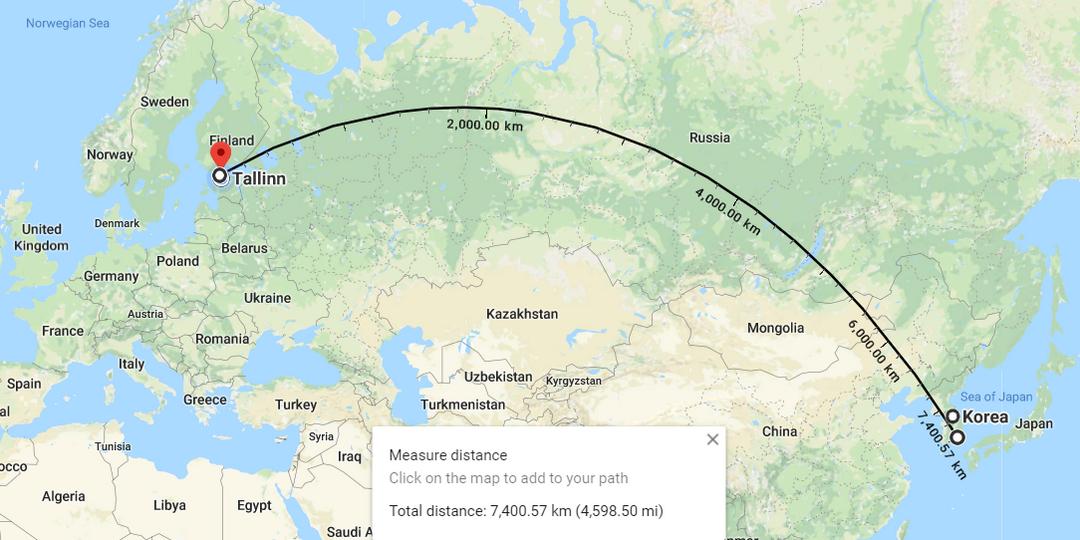 Mr. Hyeon-su Kim could not wrap his head around the fact that his money would end up in the hands of someone so far.
It was not a matter of trust, he just thought many things could go wrong on such long-distance operation.

It is a house we are talking about... can you blame him?

4600 miles is about one-sixth of the Earth circumference... stretching the same distance from Tallinn on the west side, one can end up somewhere on the imaginary line that connects Montana with North Carolina (passing through South Dakota, Iowa, Illinois, Indiana, Kentucky, Tennessee).

That is pretty far. 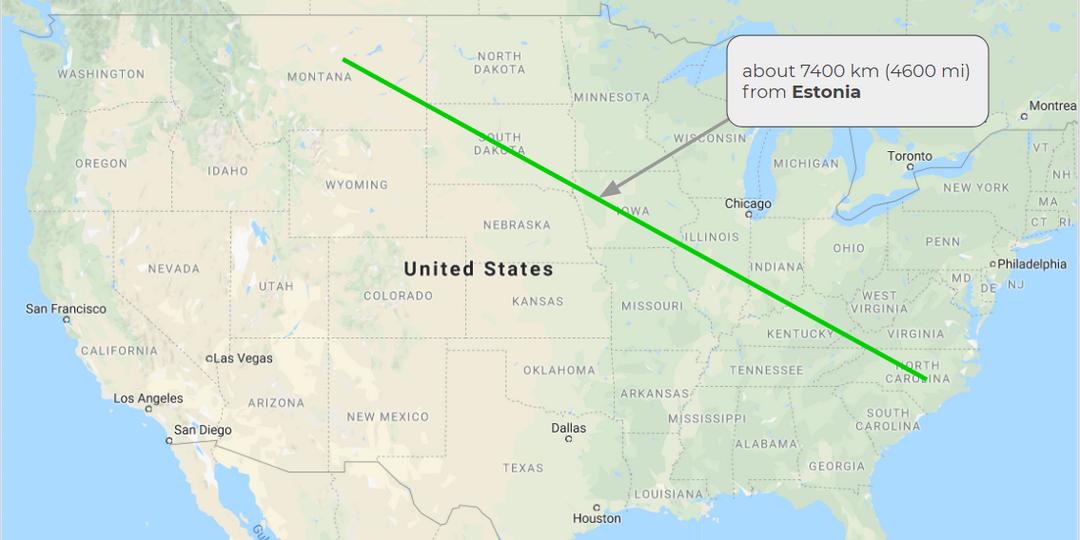 Mr. Hyeon-su Kim thought that ordering a house from a little County in the east of Europe was a risky business.

I bet you can feel his pain.

Now, it should be mentioned that Estonia of no third world Country.

Estonia is part of the Eurozone and it is the most technologically advanced Country in Europe.
It is one of the few Countries in the World to implement Digital Signatures and e-Residency.
It gave birth to Skype, Transferwise and a few more other groundbreaking Startups.

In Estonia, most people carry out honest business and share the ambition of growing, both as businesses and as individuals.

So he took the leap of faith.
He faced the fear and took the decision to place the order.
He called Avrame, he told them "my money is on its way".

On the other end of the line, Indrek (Avrame CEO) was enthusiast ...South Korea was going to have an Avrame house!

What a wonderful day.

Before that, Mr. Hyeon-su Kim and Indrek have been talking on the phone (Skype) many times.
Mr. Hyeon-su Kim had many questions about technical details for the house, about best practices, about shipping and payments.

Every time he had a question, he got his answer.
Somehow, he was confident everything was going to be ok.

It was the end of Summer, 2017.
As the order was received, Avrame put things in motion and the material for the Trio 75 ordered by Mr. Hyeon-su Kim started to be collected and packed. All the materials and components of the House Kit Trio 75 were loaded on a metal container for sea shipping and they left Estonia with destination Busan, South Korea.

The shipping was planned shortly after the order. It took about one and half month for the cargo to reach its destination.

One morning, Mr. Hyeon-su Kim was informed by the Customs that his container was ready to be picked up. He could barely hide his joy. He patiently waited for the house kit and he finally got it.

He arranged the transfer of the packages on another truck and he had it driven to his construction site. 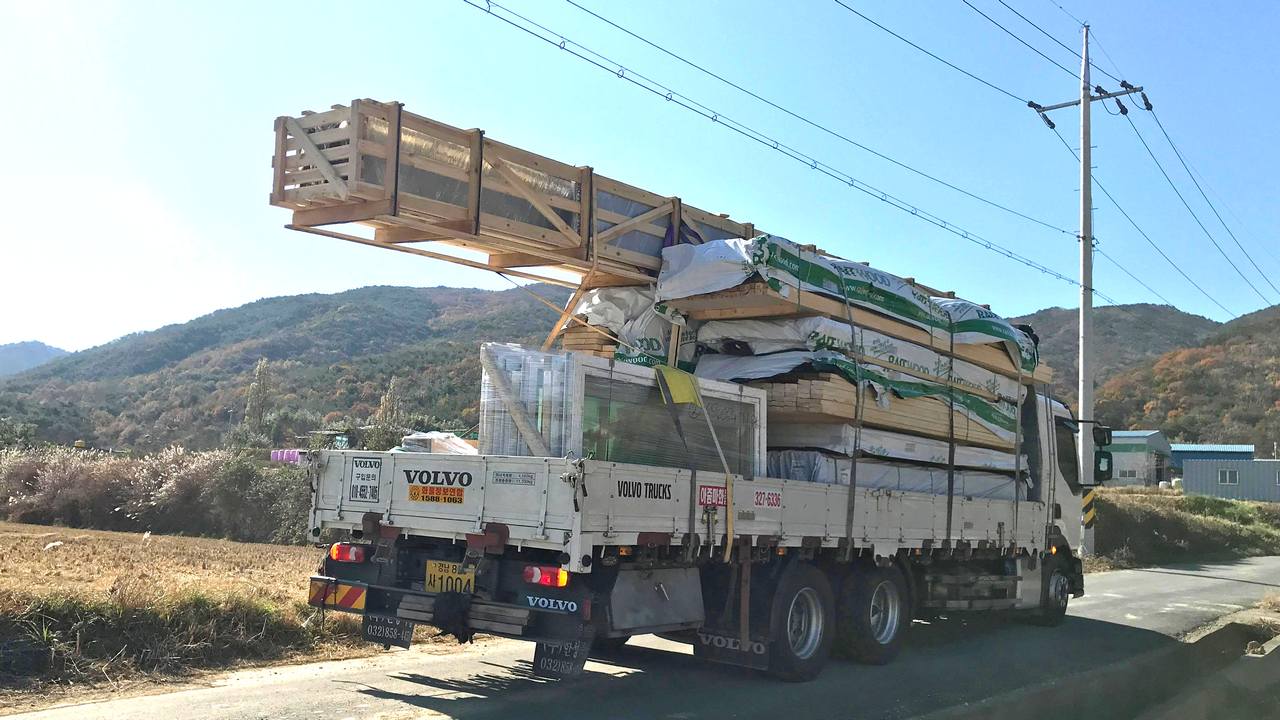 The construction Team of Mr. Hyeon-su was composed of 4 men.
As the cargo arrived, they unloaded all the packages next to the foundations of the house.

They checked that all the packages on the shipping list were delivered and that there were no damages or quality issue with the material. 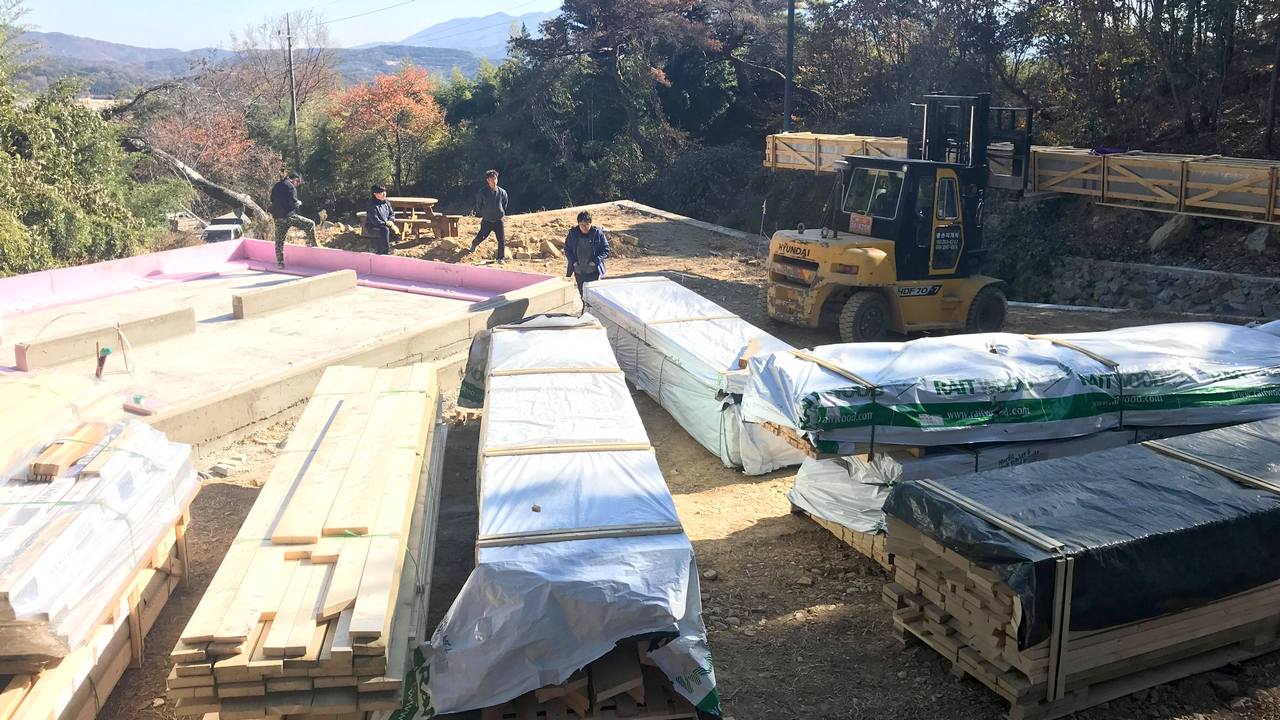 Mr. Hyeon-su Kim was enthusiast... he almost could not believe it.
He picked up the phone and called Indrek.

"I got it" - he said.
"Everything is there, just as you promised. Thank you Indrek".

Indrek was relieved to hear that the long-distance shipping went well... but he had no doubt about the goods. He knows his houses really well and the product is solid. Nothing to fear.

That night they both went to sleep with a light heart. Now that he got the house kit, Mr. Hyeon-su let go of the pressure a little bit. In the following weeks, nothing much happened on the construction site. 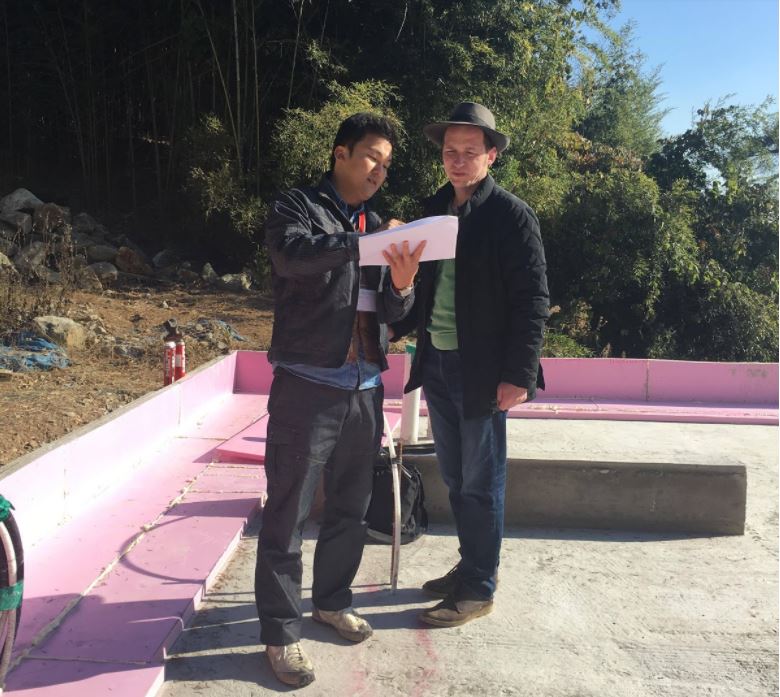 As the trip was planned, the Koreans started to put the house together.
In a couple of weeks, the framing of the house was up, standing against the blue sky. 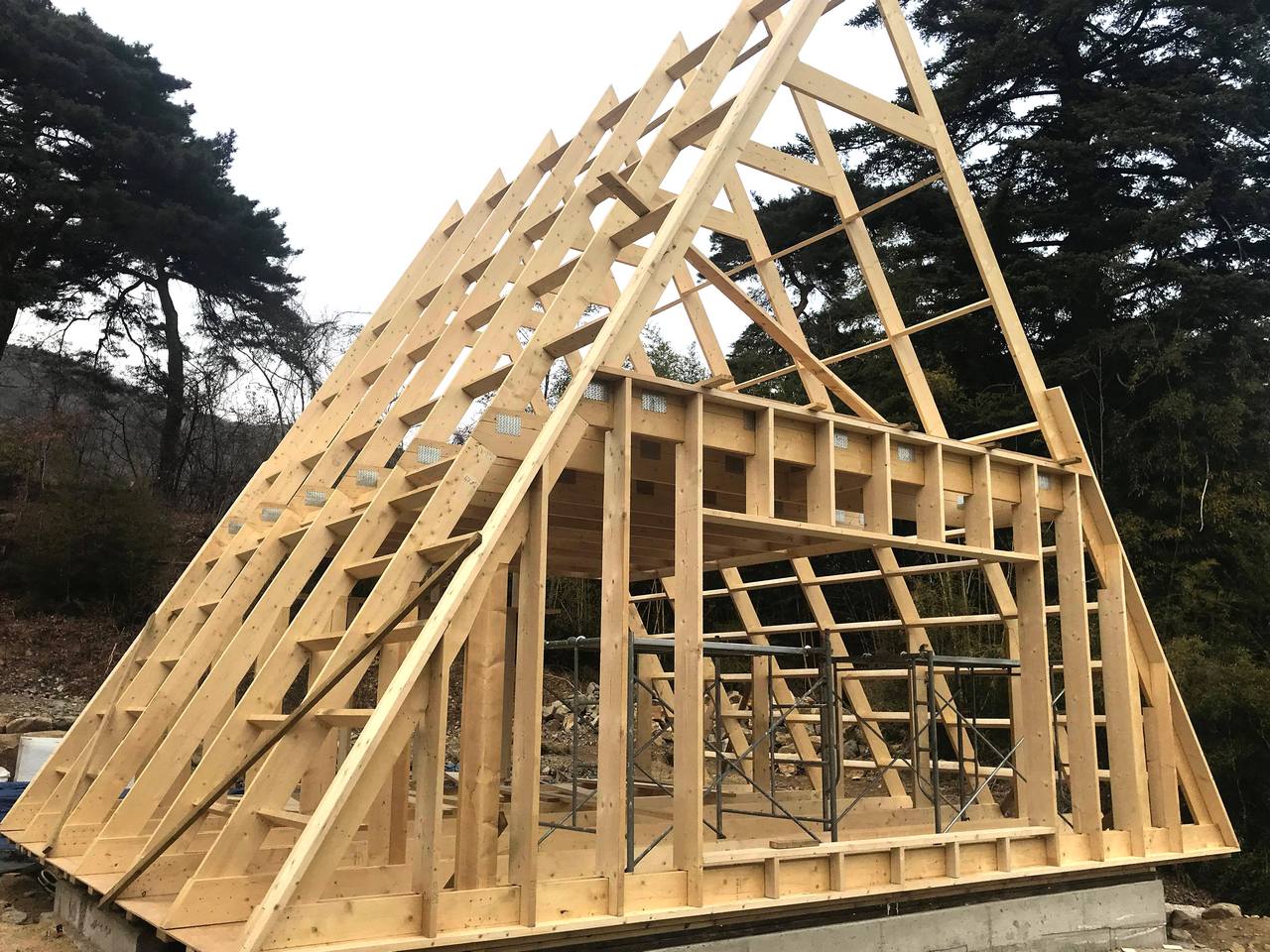 When Indrek arrived at the site he was glad to see that everything was progressing well.
The Team did a great job, assembling the frame exactly as per the instructions provided weeks before.

Indrek was indeed happy, but not surprised. He had that planned.

In fact, the instructions for putting the house together were in the hands of Mr. Hyeon-su Kim well before the house arrived.

The e-mail with drawings and assembly manual was sent immediately after the order and so the Korean Team had weeks of time to study the documentation and plan everything in advance with great detail.

Indrek has been in the construction of timber-framed houses for over two decades and he knows how important planning is.

Even if you are just dreaming of building a house, holding its drawings in your hand can put you a step closer to it.

"There is still a lot of work to do" - replied the man.

"You eat an elephant one bite at a time" - continued Indrek smiling - "It is good you got the drawing well ahead of time, I see you made good use of them".

The two men stood inside the empty frame of the house for a while. "This location is majestic" - thought Indrek, happy that one of his houses made it all the way there. 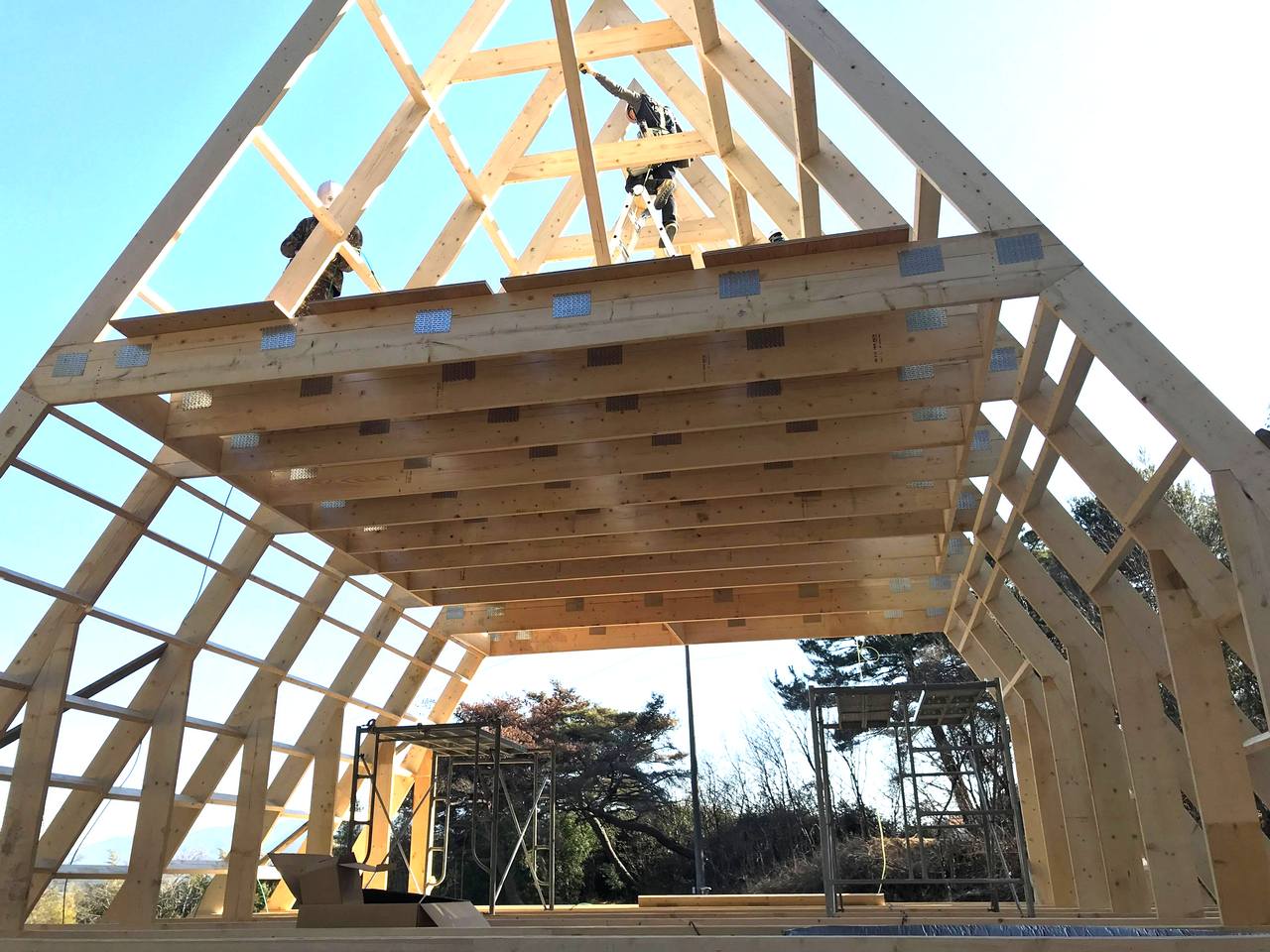 After Indrek visited the site, the mood of the assembly Team was at its best.

In the following weeks, they kept working following the instruction manual and the house was soon weathertight.

It took less than a month to get that far in the construction. 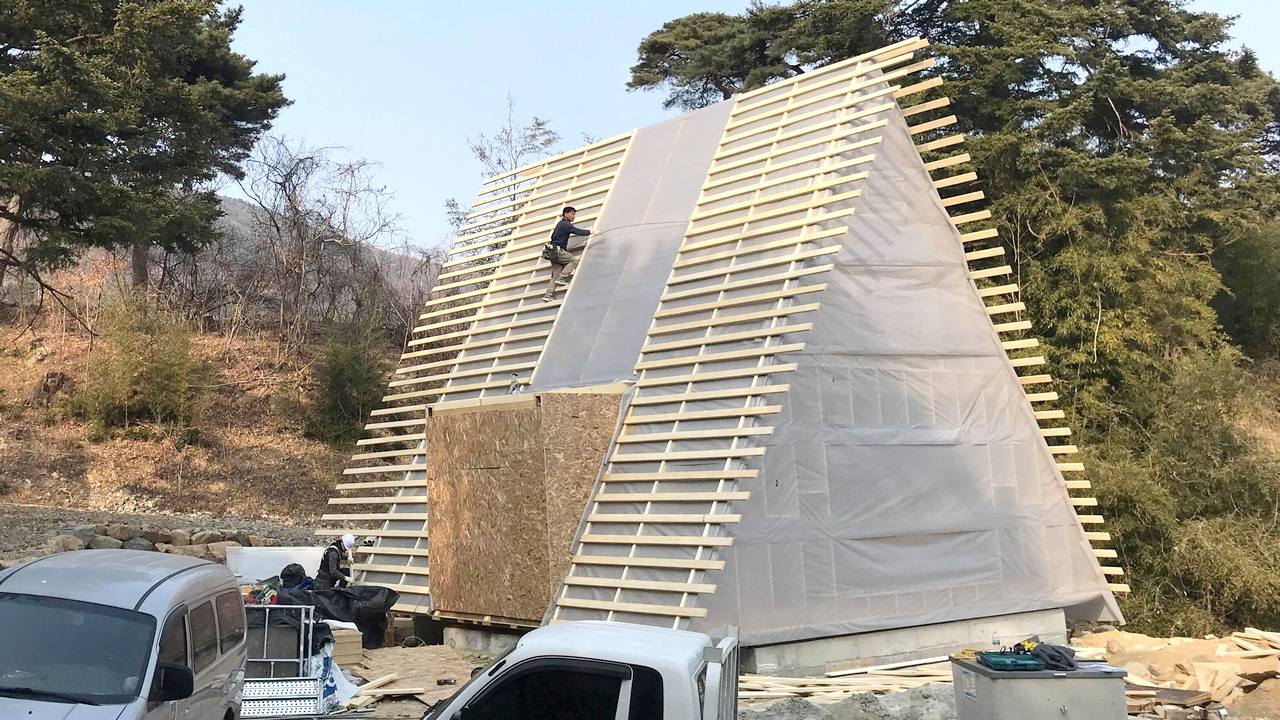 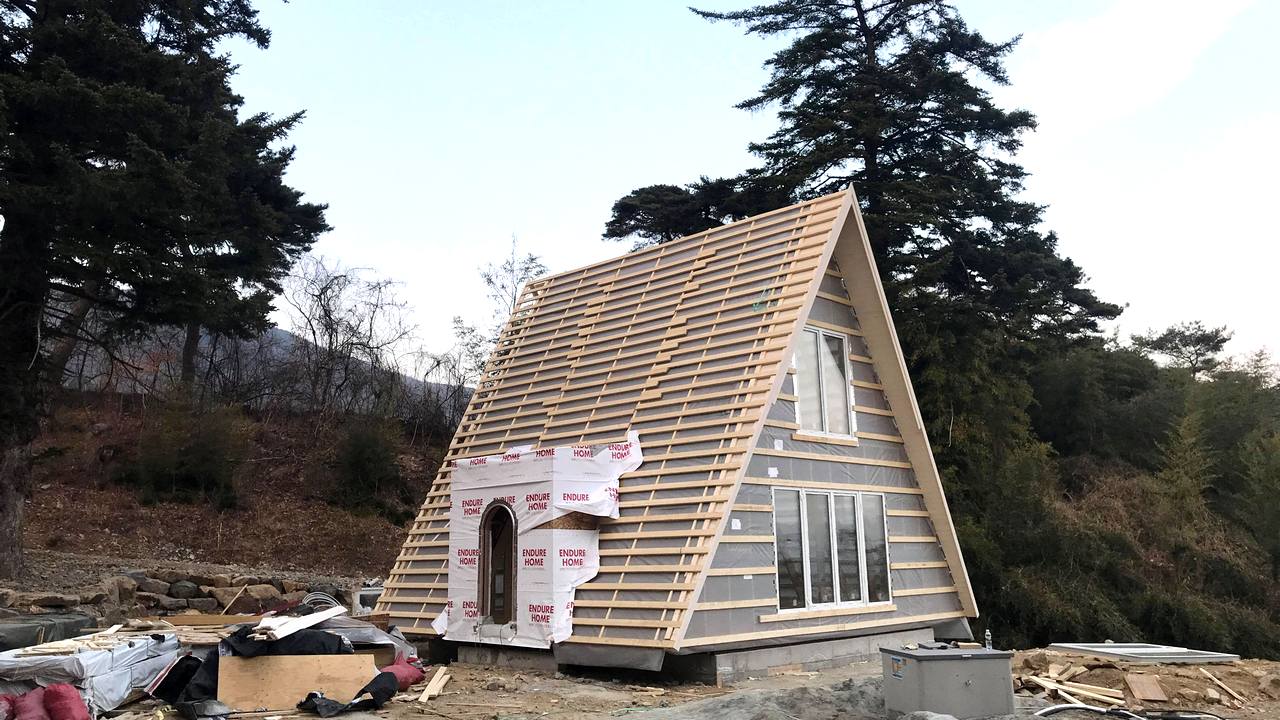 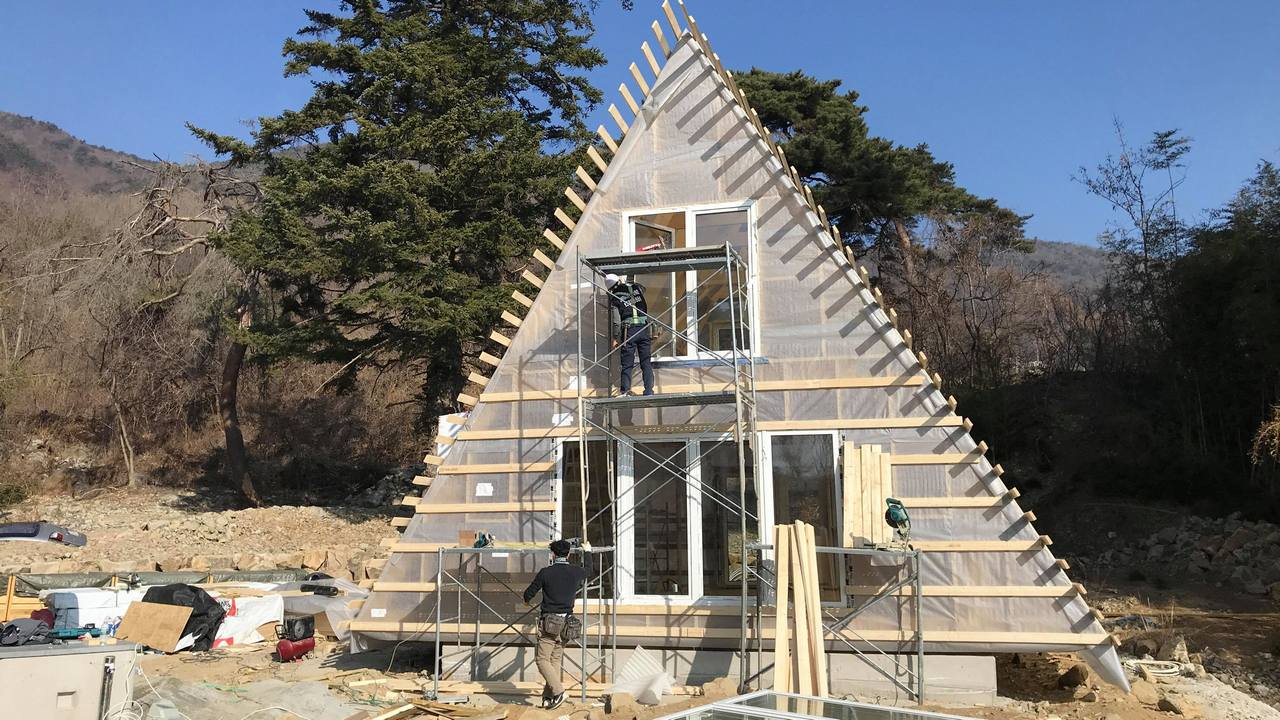 Every day Mr. Hyeon-su Kim went to the construction site to check on the work of his men.
Every day he felt a bit closer to completing his dream of building an A-frame house on his land.

As we write this article, it has been less than two months from the start of the assembly works and the house is almost finished from outside. 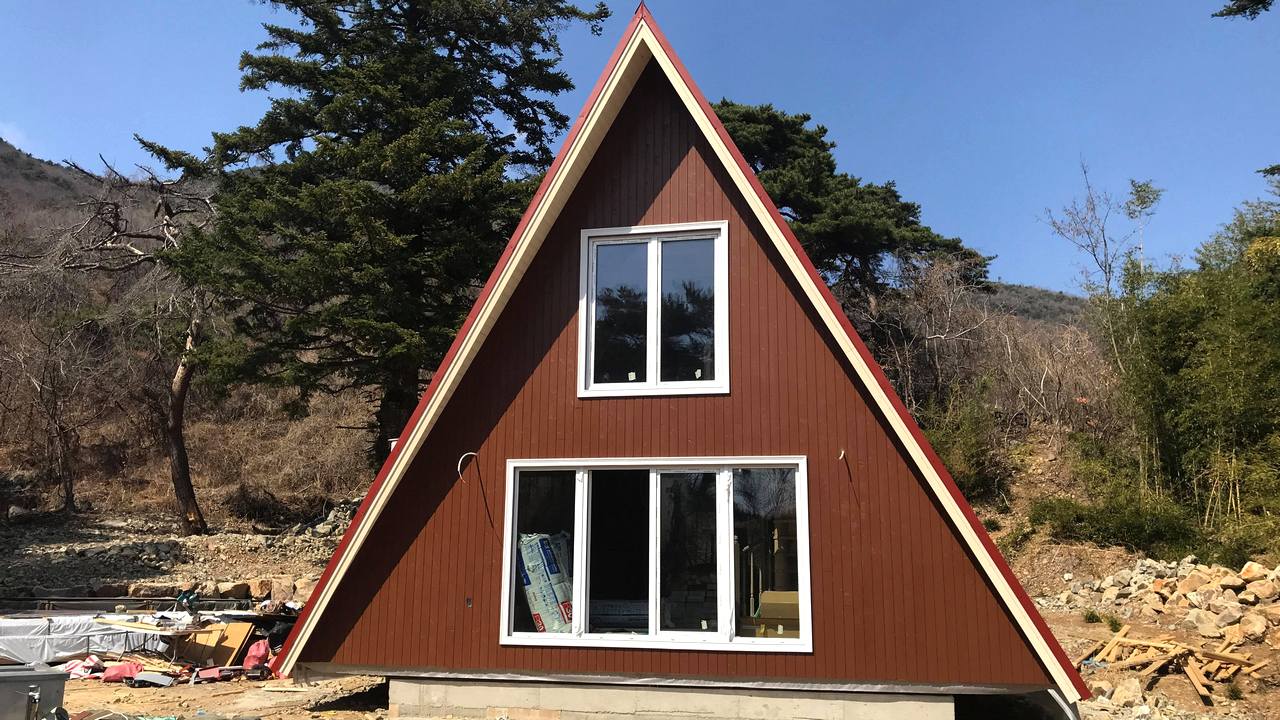 Now men moved to work on the inside and the rooms are slowly taking shape.
Indrek estimates another month to get the interior basically ready for finishes.

The friends of Mr. Hyeon-su Kim still cannot believe that house arrived by truck from a land so far.
They thought this entire undertaking, this dream, was a bit naive.

Now they look astonished at the little house on the top of the hill.

Mr. Hyeon-su Kim made it. He has an A-frame house, exactly the way he wanted.

By building in Korea, Avrame demonstrated that its house concept is not limited by geographical boundaries.
They also proved they can build and assist their Clients even if they are on another continent!

THAT is pretty remarkable :)

We look forward to seeing Avrame houses starting to pop-up in America, Canada and on remote locations that cannot be served by other house Manufacturers.