A-frame houses: homes for those who (can) calculate “The A-frame house is an A-shaped building which, back in the Soviet era, was familiar to people as a building typology that had the roof touching the ground, or Rannapiiga. This typology is not known for its trendiness but rather for being (by square meter) at least half the price of a normal new building” explains Indrek Kuldkepp, the founder and one of the owners of Avrame.

When designing his own house, Inkrek Kuldkepp followed the principle that the building is meant to worship its residents, not the other way around. He does not consider it reasonable to take bank loans with high interest for decades to live in an unreasonably huge building.
Instead, he focuses on the feasibility of the building from the very beginning of the design process.
As his own home exceeded expectations and proved to be comfortable as well as profitable, he decided to start producing the A-frame houses for the market as well. 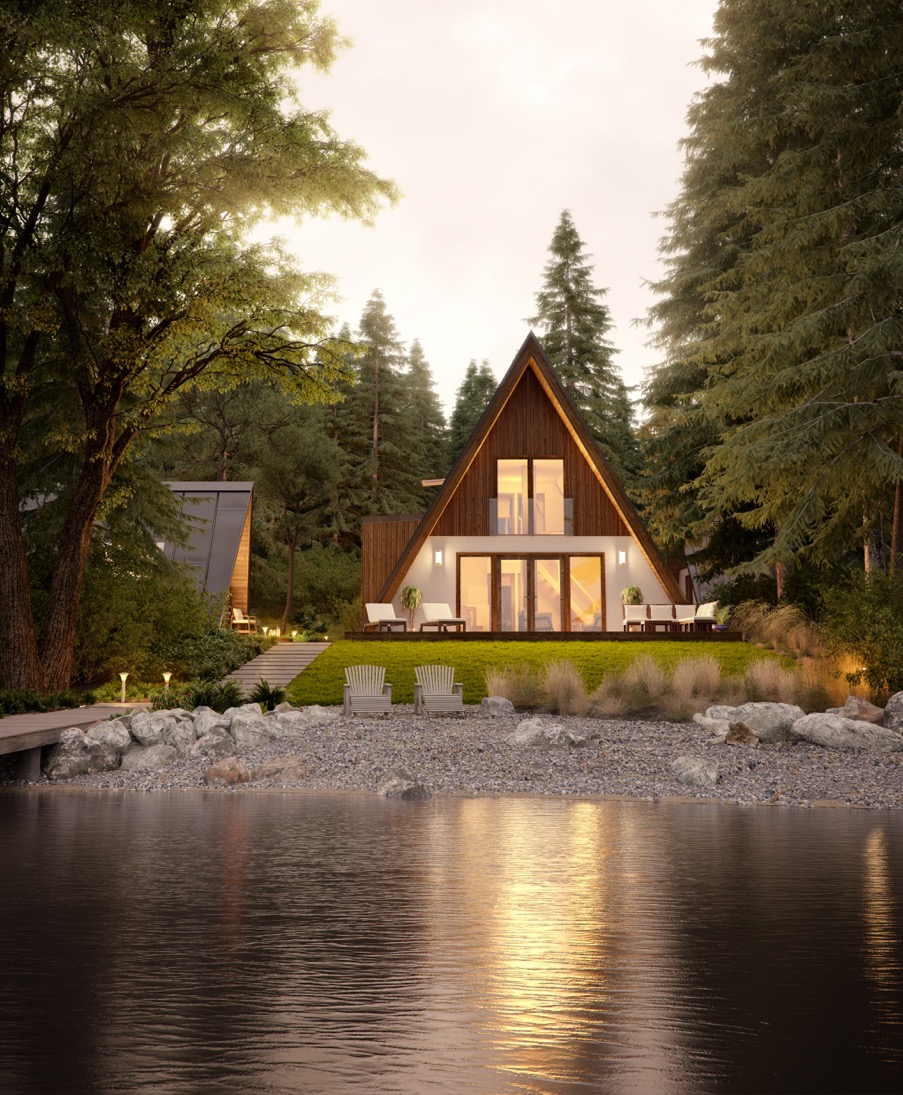 How did you come to the idea of A-frame building?

I was looking for a fast and economical solution that would mean I could afford a house without a bank loan and found an A-frame on Pinterest. I studied the history of this type of building and it impressed me a lot. Already back in ancient times buildings used to be triangular, although the style reached the peak of popularity in the US in the 60s and 70s during the poorer post-war era.
Here in Estonia, such houses were built in the 70s for the same reason of limited resources.

What standards did you set for yourself when designing your house?

One of the conditions was that it should be reasonably easy to build, enough to self-build.
It is always hard to find good contractors. I often hear that people had bought high-quality materials, but in the end the building itself is still of poor quality. Therefore I was looking for a type of construction that could be built solo. 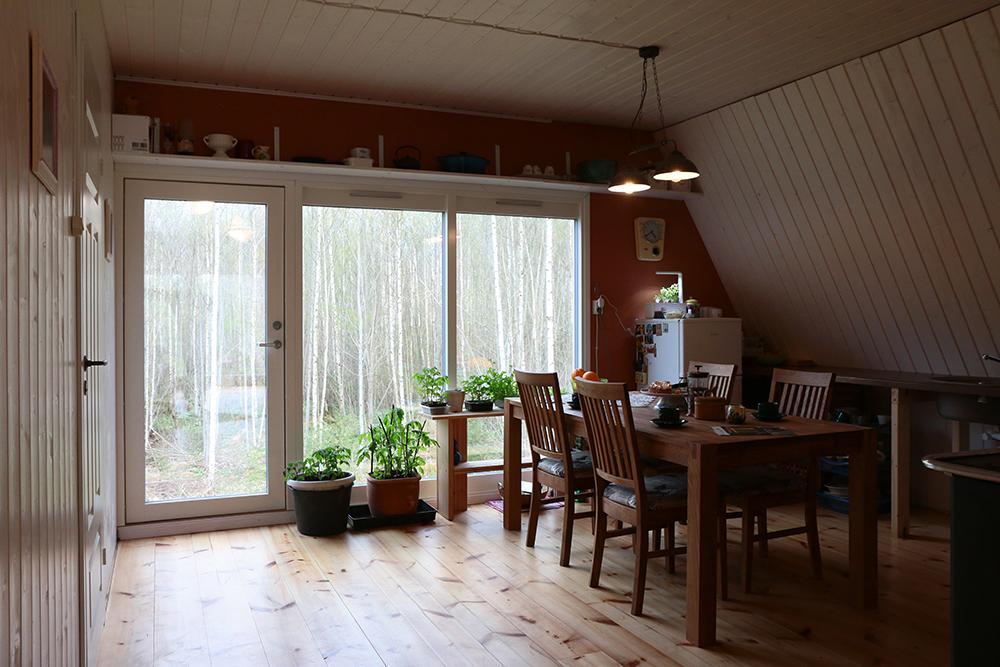 There were no major setbacks during the construction and this encouraged us to start reselling.
I have 18 years of sales experience in wooden houses and also had the support of experienced specialists. Building a house on your own is always difficult and it is common to be overwhelmed.

Of course, one can always buy a ready-built house with a price that includes everything, including the profit made by the contractor, developer, real-estate agents.

When money is not an issue ...then why not ...but when you are looking for affordable solutions then a self-built solution is worth considering. 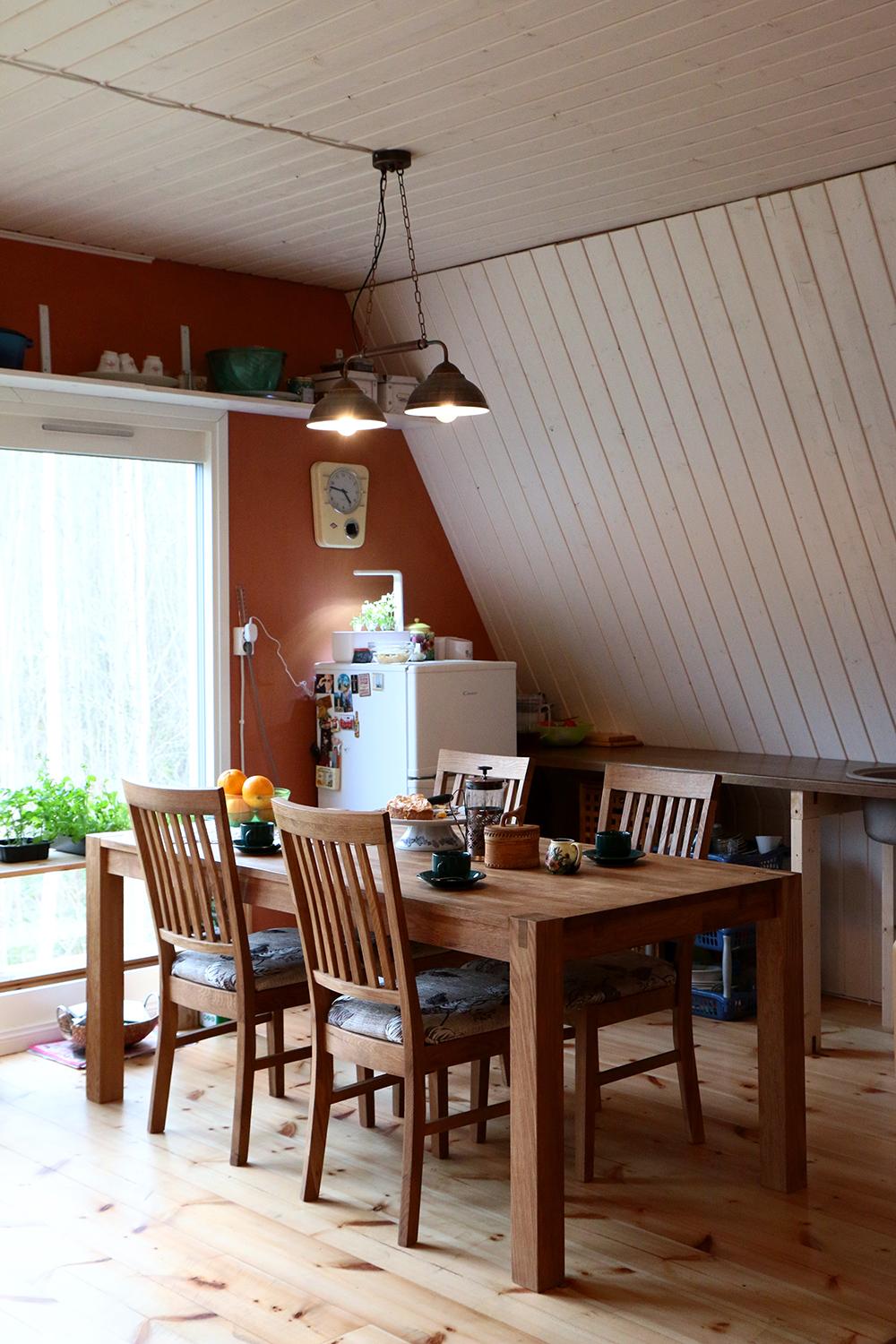 A-frame houses have pros and cons, the price is for sure an advantage.
The price for my house was about half the price of the market price, making it a bit less than 600 EUR per square meter. One of my friends asked me whether I stole the materials – how else did my project turn out to be so affordable?

But of course, I bought all the materials and stayed away from cheaper options, especially when it comes to details. I have wide pine boards on the floor and the walls are covered with Spanish clay paints.

When your budget is 1500 EUR per square meter, then you do not have to cut corners – you will get high-quality building and you can make something cool and stylish.
When your budget is 1200 EUR,   then you will miss out on the coolness.
With a budget of less than 1000 EUR, you either have to build it yourself or save on materials.

As for cons, the interior design of an A-frame house is pretty simple. I gave up the coolness and acted on my own. The whole building is basically an attic and someone can see it as giving up on comfort. I have no problem with it but I must confess it gets complicated when trying to fit the furniture. 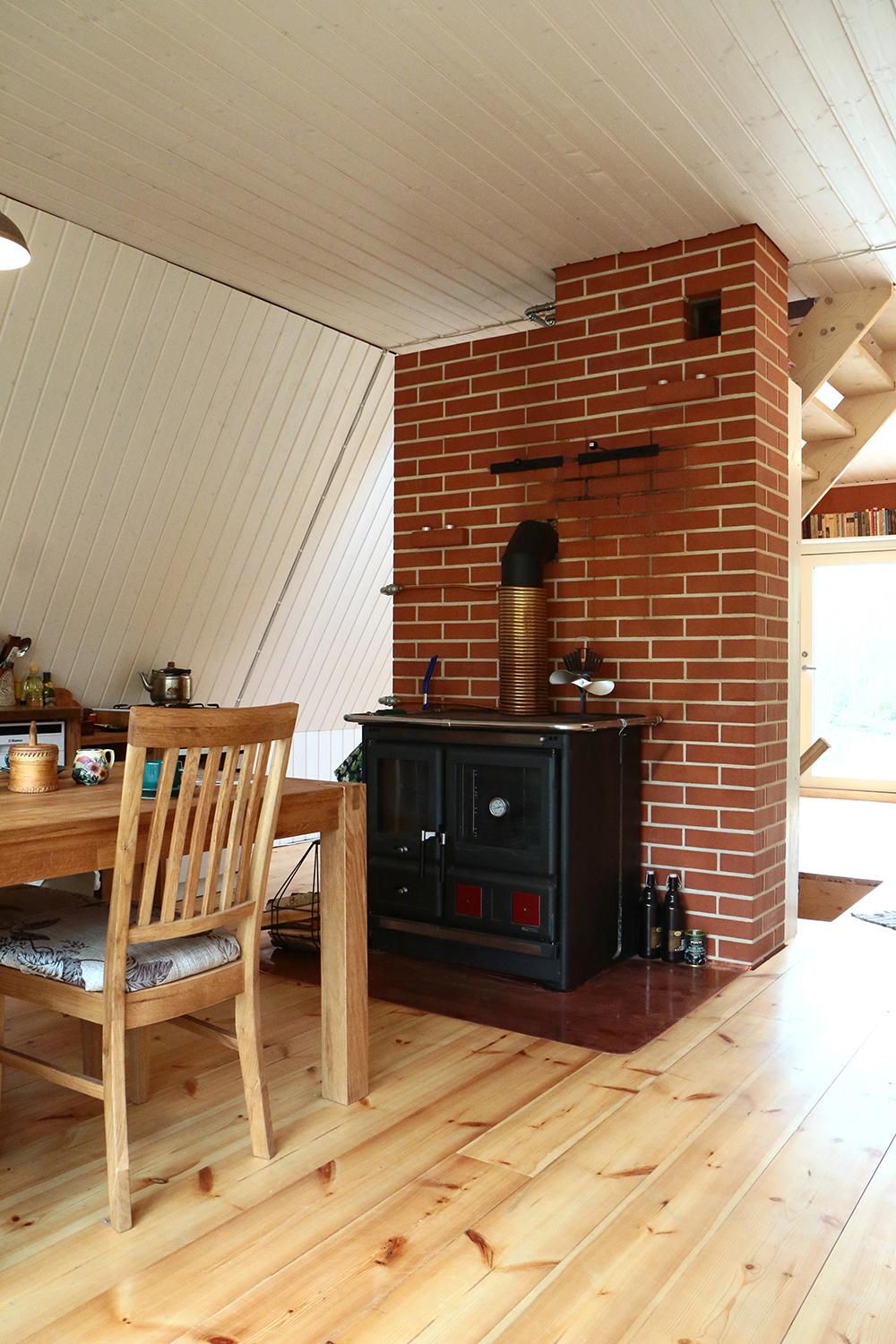 How long did it take to transform the original ideas into a prototype?

I was searching for ideas for about 9 months, and the building took as much. When today I offer the same model to clients, then the first nine months can be skipped - we have been through that already, and the construction itself takes much less time.

When ordering a house from us, the foundation has to be ready and then it takes about 4 to 6 months to finish the construction. With a handy main contractor, it is even possible to finish the house within 3 months.

If someone orders a house from you, what do they get?

We sell A-frame house kits.
As a basic configuration, we give the frame of the building (windows, doors and the undercoating of the roof) so it is possible to assemble the building envelope.
It is also possible to have the frame with SIP-panel insulation, which takes only a couple of days to set up.

When buying an A-frame house kit, the client has to take care of the foundation, infrastructure and interior finishing. We offer the roof as well, meaning that clients get a fully prefabricated building.

The large packages arrive at the construction site. The builders then raise the triangular frame on the foundation, followed by the roof boarding, then the insulation, and so on.
It is not a modular building with all the rooms ready-made where only the modules need to be joined (and which therefore have much higher prices per square meter). 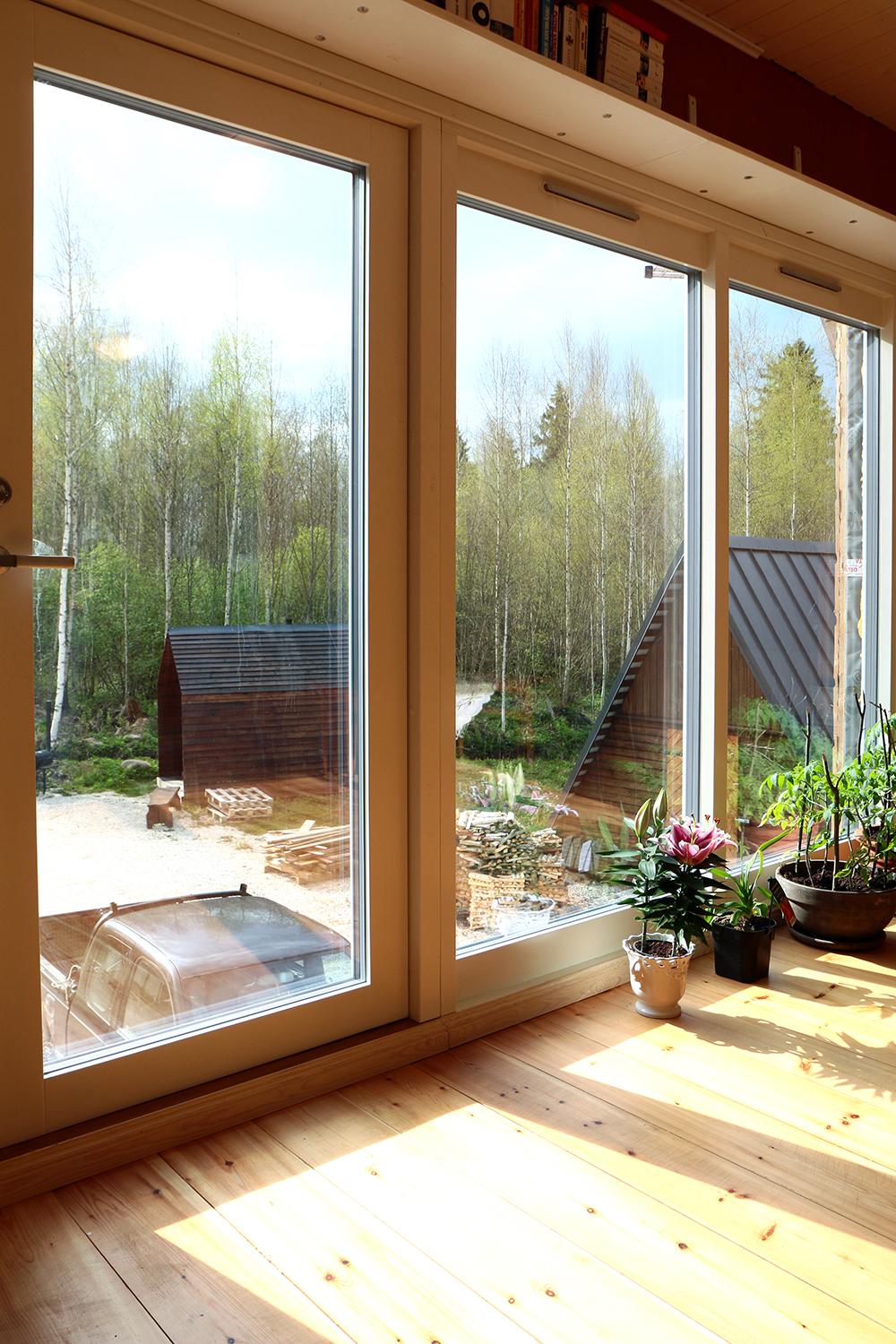 Large windows on the southern facade open up views to the surrounding forest.

Would an average handyman be able to accomplish the construction on his own?

Yes, It is possible, as our drawings are very simple. So if you really would like to have the hands-on experience of building your own house then it would be a reasonable choice.
Our sales are based on the fact that our frames have been thoroughly constructed in collaboration with engineers and architects and this part can thus be skipped.

You were collaborating with architect Tiit Sild – what kind of advice did he give?

The house is now much more functional and also more stylish. There is more light inside as we went for full-length windows and changed the locations of the doors, as he suggested. In addition, we opted for the same size windows on both sides of the building, which saves expense during production as well as during construction.

You will soon be celebrating the first half year in your new home – what is your impression?

I am very pleased - the building is warm and functional, and as I previously lived in a very small house, so the contrast is noticeable. I was amazed by the functionality of my new house – it has a floor area of just a little more than 70 square meters, yet it is more than enough for three people. Not once have we had moments of regret, we have everything and nothing is lacking.

The heating uses firewood: there is a heat-proof wall and a very efficient Italian cast iron stove that keeps the house warm for about a day and a half in one go. 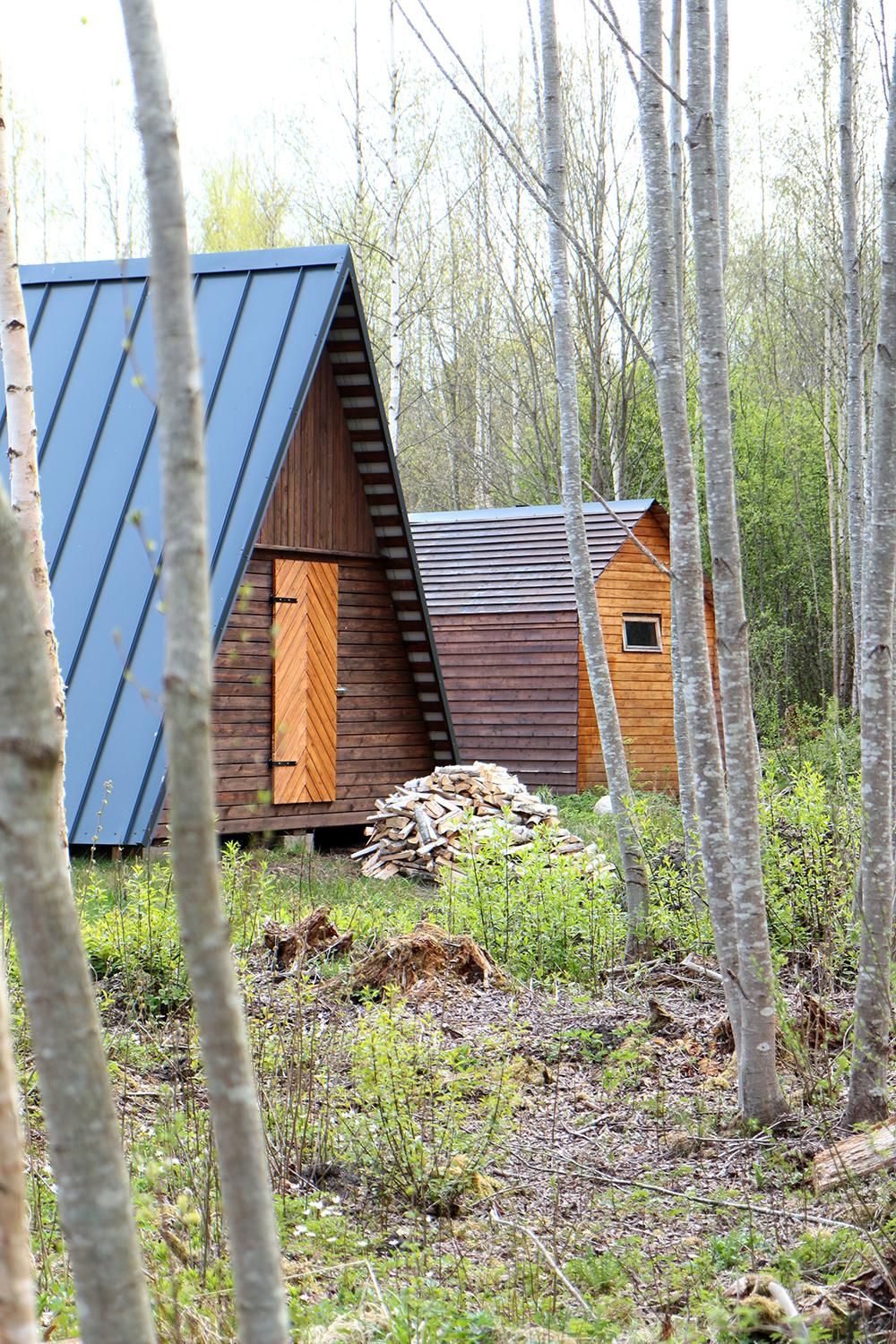 When did you come up with the idea to start selling this type of house to others?

My whole working career has been based on designing and selling wooden houses so already during the construction phase I was thinking how, if everything turns out well then, I would start offering it to others. We have now been marketing the house for a couple of months and there are already few houses in production, all within a very short time.

Our main focus is on export. Yesterday we were negotiating with our potential re-sellers in Japan and South Korea – they have grand plans. We are sticking to our schedules and can manage on our own. 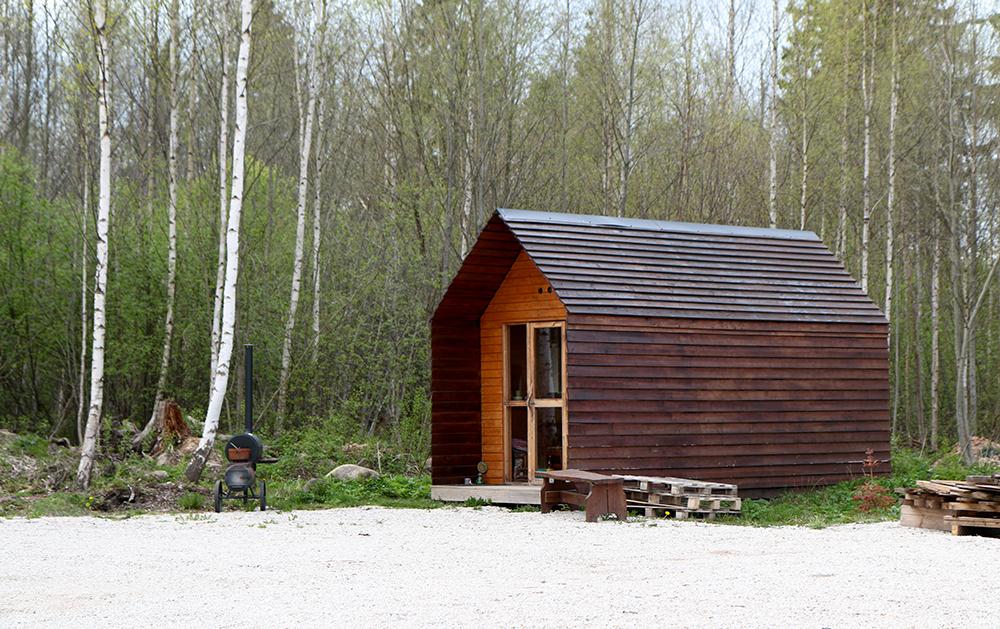 There is tight competition in the housing market, why should one choose an A-frame house from Avrame?

In the Estonian market, we have mainly been asked for summer houses as the economic welfare is quite high and people are looking for something larger and more interesting for a dwelling. Our concept lies in a very reasonable solution: the design is not cool, but first and foremost it is very functional.

When the next economic recession hits, then the A-frame would do well as a dwelling. Soviet-era people tend to think of private houses as a luxury, but a house is still just a necessity and it should be affordable also in terms of lower budgets.

It is easy to go for a bank loan, but when times are harder, then people are willing to contribute more themselves – this is where the saving comes from.

When ordering a house from you now at the beginning of the summer, would it be possible to move in for Christmas?

Absolutely, there are no obstacles on our side.